Birmingham Airport has announce that for the third year it will be the headline sponsor of the Chinese New Year festival in Birmingham.

The Chinese New Year festival will be held on Sunday 10th February and is expected to attract more than 30,000 revellers. Friends and family will gather in the Southside area of the city to enjoy the vast entertainment – including lion and dragon dancing, fireworks and other performances, as well as local Chinese cuisine available to all passers-by. 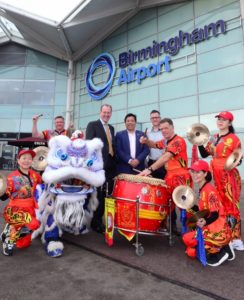 This year will be The Year of the Pig in the Chinese lunar calendar, with the new year falling on Tuesday 5th February. However, celebrations will run throughout the first half of February, up until the 19th February.

Over this period, festivities will be found across the city’s popular hotspots, including Colmore Row and St Phillip’s Cathedral, Bulling and Grand Central, and China town – spreading across Southside Square, Hurst Street, Inge Street, The Arcadian and The Hippodrome.

Birmingham Airport will have a strong presence throughout the period, particularly at the festival. To celebrate Chinese New Year, those who visit the Airport stand will be in with several chances of winning flights to China.

Celebrations will also spread to the Airport, where retailers will be running various offers, activities and entertainment. Passengers will be given the chance to enjoy a traditional lion dance performance in the terminal on Tuesday 5th February – the official Chinese New Year’s Day.

The West Midlands has one of the biggest Chinese communities in the UK, with a population of over 20,000 living in the Midlands, plus an additional 150,000 Chinese students studying across the region. In the last 12 months alone, Birmingham Airport welcomed nearly 120,000 passengers through its doors travelling to either China or Hong Kong.

Nick Barton, CEO at Birmingham Airport said: “Supporting Chinese New Year 2019 as the headline sponsor for the third time is fantastic and something we are extremely proud of.

“The Midlands region holds great heritage and culture, especially in Birmingham which is said to be more ethnically diverse than the UK’s capital of London for its size[1]. To be a part of this history and culture is important to us, as we too hold great regional heritage and will be celebrating our 80th anniversary this year.

“As well as sponsoring the Birmingham festival, we will be holding celebrations of our own for passengers to enjoy in and around the terminal over the new year period. We would like to wish all those celebrating Chinese New Year a happy and prosperous year ahead.”

James Wong, Chairman of Birmingham’s Chinese Festival Committee added: “We are delighted to have Birmingham Airport as our headline sponsor once again and are looking forward in producing another fantastic event for the city of Birmingham. Last year’s celebration broke all records in attendance and we love how diverse the city is, in celebrating the Chinese New Year.”

Graham Callister, Associate Director, Community Engagement & Festivals at The Hippodrome commented: “We’re proud to be once again co-producing the annual official Chinese New Year celebrations with our good friends and neighbours, the Chinese New Year Festival Committee. Working with headline sponsor Birmingham Airport and all of our event partners across the city to deliver a fantastic free event for Birmingham and the West Midlands.”

To find out more about the Chinese New Year celebrations, visit