Birmingham’s famous Frankfurt Christmas market opens this week and passengers travelling by train are advised to plan ahead allow extra time for their journeys.

The market opens on Thursday 15th November and runs until Sunday 23rd December.

West Midlands Railway and London Northwestern Railway are advising customers to prepare for trains and stations to be busier than usual, by allowing plenty of time and planning their journey options before heading out.

Andy Camp, commercial director for the two train operators, said: “Travelling by train is a great way to get to and from the city centre during the festive season. Trains and stations will be busier than usual over the next five weeks, so there may be queuing systems in place at Birmingham Snow Hill and other stations. These will help keep people moving safely through stations and onto trains. 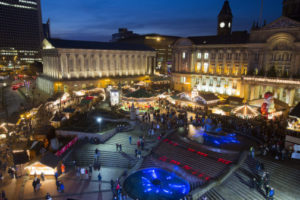 “We advise anyone travelling to plan their journey options, allow some extra time and to make sure that they know when their last train home is departing – as we don’t want anyone to get left behind.”

“Our advice to passengers is allow extra time to make your train, don’t rely on your last service and check before you travel. There will be extra staff in place across the station to provide advice and information and help keep passengers safe.”

Passengers are also being urged to think ahead and plan their journeys if they will be using the rail network over Christmas. As part of its Railway Upgrade Plan, Network Rail will be carrying out improvement work across Britain between 24 December and 2 January which may affect journeys.

Passengers can plan their Christmas travel at www.nationalrail.co.uk/christmas