The winter nights are set to hit the streets hard and as the city is busy preparing for the festive season, the homeless community is struggling to stay warm. To help support those who need it most, LoveBrum’s Bags for Brummies campaign returns for the second year running, after a successful pilot that saw 1,000 people given essential supplies to survive the colder months.

The Birmingham-based charity is calling out for donations from the general public to build on the success of last year. The list includes warm clothing, a range of toiletries, sleeping bags and blankets, as well as a small gift, such as a supermarket voucher or a book, to make someone smile this Christmas.

LoveBrum’s executive director, Paul Mitchell, comments: “LoveBrum is encouraging friends, colleagues, and next-door neighbours to come together and collect supplies to contribute to our campaign. It’s this community feel, of us all coming together to help people less fortunate than ourselves, that helped Bags For Brummies go viral last year! We received such an incredible response that we didn’t just donate bags in December, but right up until March!” 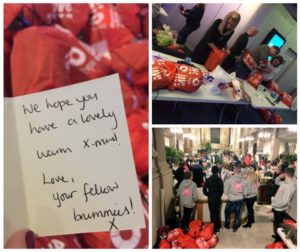 LoveBrum set out with the original aim of filling fifty bags for the homeless, but thanks to the overwhelming support of the city, over 100 bags were donated.

Paul continues: “Bags for Brummies is the perfect example of the city’s spirit; bringing together people from all walks of life to help those who need it. The winter months are unbearably tough for those living on the streets and we hope that these bags can help alleviate that struggle, even slightly, for people in that situation.

“The way Bags for Brummies works is simple. Just bring your donations to the Zellig Building reception and LoveBrum’s volunteers will pack them all into bags at their bag packing day. We’re so thankful to everybody who donated supplies and our tireless volunteers who helped to pack bags last year, and I really hope that they all join us again to make the campaign even more successful.”

Ben Rafiqi, one of the co-founders of Let’s Feed Brum, comments: “It’s great to see LoveBrum supporting the work we do here at Let’s Feed Brum. The winter is such a hard time for those on the streets, but Bags for Brummies shows how if we all do a little, it can make such a huge difference for those who are struggling. It is humbling to see everybody coming together to make it that bit more bearable and on behalf of all those we work with, I would like to thank you.”

You can drop your donations to the Zellig Building reception, Gibb St, Birmingham, B9 4AA or Solihull Fire Station Streetsbrook Rd, Solihull B91 1QY every day until 5th December. If you have any queries or your collection is too large to drop off, contact bags@lovebrum.org.uk.