As the number of road traffic collisions attended by Midlands Air Ambulance Charity continues to rise each year, the emergency pre-hospital service has launched Drive4Life in partnership with M6toll, to highlight the increasing cost of RTCs to the charity.

Each vitally important air ambulance mission costs the organisation £2,500, which is solely funded through the generosity of the communities it serves and local businesses. In 2017, Midlands Air Ambulance Charity attended 664 RTCs, which cost a shocking £1.7million. 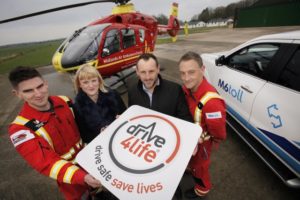 Ian Roberts, air operations manager for Midlands Air Ambulance Charity, said: “Due to the nature of our operation, and the ability to bring enhanced pre-hospital care to the roadside, the critical care paramedics and doctors often called out to some of the most badly injured patients involved in road-related incidents.

“Due to the rising number of RTCs the aircrew attend each year, the cost to the charity is naturally on the rise too. As a service, which operates solely on donations, it is extremely important we continue to raise funds to ensure we can respond to these patients whenever we’re needed.

“Drive4Life therefore aims to highlight why it is so important to support us, and as part of the campaign, we are working alongside longstanding corporate partner, M6toll, to encourage car dealerships to get involved and donate to us, every time they sell a vehicle.”

James Hodson, director of motorway operations at M6toll, adds: “While statistically the M6toll is one of the safest motorways in the UK, we are always grateful for the lifesaving support of the Midlands Air Ambulance when accidents do occur. We are so proud to support this valuable campaign, helping to communicate vital road safety messages to drivers across the Midlands and beyond.”

To find out more about the Drive4Life campaign, visit here If you’re a car dealership interested in the campaign, contact Sofia Voutianitis on 07901 332 684 or via email sofia.voutianitis@midlandsairambulance.com