There’s another series of great gigs at the Robin 2 in Bilston this week.

One of the great unsung heroes of the local music scene over three decades will be performing at the Robin on Thursday 21st September. Vincent Flatts (pictured) first made a name for himself in the early nineties, building up a reputation as one of the best attractions on the Midlands gig circuit with his brand of country blues along with 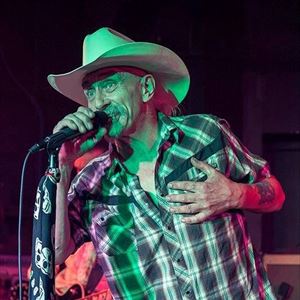 backing band Final Drive. After a few years self-imposed exile, Vincent returned to the live circuit with new outfit Lawless, who have already played a lengthy series of dates around Europe.

Old favourites Big Country return to the Robin stage on Friday. One of the most popular British acts of the eighties, the band still continue to attract fans old and new as they tour the world, drawing on a back catalogue of stirring anthems from a career of top ten singles and platinum-selling albums to provide a memorable live show.

Then on Sunday another new arrival to the Robin will take the stage in the form of the Big Wolf Band. Described by one critic as “a rock blues powerhouse”, the band have gained a growing live reputation on the back of a highly-acclaimed debut album that has achieved radio airplay around the world.

For ticket sales and enquiries about these and all other Robin gigs, visit www.therobin.co.uk or tel: 01902-401211.