Already a favourite location of ghost hunters, Birmingham’s Victorian Lock-up in Steelhouse Lane will be resurrecting the spirits of past residents this October 19th–2st1 with Behind Bars: Ghosts of the Lock-Up, a three day event which takes a theatrical journey through the cells, corridors and stairways of this eerie Grade II listed prison.

Since 1892, thousands of people have passed through Birmingham’s Central Lock-Up on their way to court, prison or even the noose. Now, eight of the region’s leading writers will be summoning the ghosts of the Lock-Up, including robbers and drunkards, prostitutes and murderers, as well as the policemen and pioneering policewomen who held the keys. 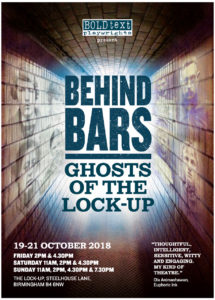 As visitors move around the building, they’ll encounter real characters from the Lock-Up’s history including convicted murderer James Twitty; Maud Dillon, arrested for Lewd Behaviour; and the notorious Tommy Tank who was incarcerated so many times for being drunk and disorderly that he was banned from every pub in the City.

One surprising attendee was the world famous French actress Sarah Bernhardt who was required to sign the Alien’s Register when she performed at the Birmingham Grand Theatre during the First World War.

Writer Tim Stimpson from Boldtext Playwrights, who is producing the event in association with West Midlands Police Museum, says: “The Lock-Up is an extremely atmospheric building and we’re offering visitors the unique experience of discovering what life must have been like inside one of Birmingham’s most notorious buildings. We’ll be summoning up a few ghosts of our own but, as the Lock-Up is reputedly haunted, we can’t say who else may put in an unscheduled appearance!”

The eight playwrights include writers for theatre, TV and radio, as well as novels, musicals and film, with Boldtext member Stephen Jackson winning a West End Wilma award for Best Comedy for his musical Rollerdiner, and The Archers writer Tim Stimpson being nominated for a BBC Audio Drama Award for Best Series in 2017.

The show, funded by Arts Council England and The Barry Jackson Trust, lasts around an hour and runs several times a day between Friday October 19th and Sunday 21st. Tickets cost £5 and £10 and can be pre-booked via Eventbrite.