Northfield Ecocentre have announces that one of their partnership projects has been chosen to represent urban community gardens at this year’s RHS Malvern Spring Festival.

Since 2015, the Ecocentre has provided two days support a week to Allens Cross Community Association in the Northfield area of South Birmingham, to deliver a community growing space for the Trescott housing estate. People using the garden include those experiencing a range of social and health disadvantages – mental health problems, learning disabilities, and those not in education, employment or training. 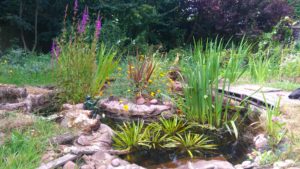 RHS Gold Medal winner Hannah Genders and her team invited Allens Cross Community Garden to be part of EGG – Eco, Green and Growing at the Spring Festival. Themed around growing food in the community, EGG will incorporate live music, talks on eco gardening as well as demonstrations such as willow weaving and interactive art. Allens Cross Community Association will showcase how communities can grow together, transporting several of their compact container gardens and upcycled garden features to the Spring Festival. Volunteers from Allens Cross Community Garden and members of the Northfield Ecocentre team will also be on hand to talk about the project.

Allens Cross Community Garden started in 2015, transforming a disused playground and surrounding wasteland. The garden now has a bee hive and an associated education project Bee Mindful, polytunnel, greenhouses and mandala garden. They have 18 regular volunteers at the site. Last year 185 kg of fruit and veg was harvested from the garden. This is equivalent to 2,313 meals or £1,109.34. In 2017, the community garden also received a Britain in Bloom Outstanding Award for its work.

A parent of one participant said: “When my autistic boy was on a reduced timetable at school, Ecocentre staff gave him their time to enjoy gardening and outdoor educational activities. He was very low in self-esteem and feeling rejected. This help was significant in building up his confidence, letting him access learning activities at his level. His anxiety reduced in the garden. It had a really positive impact on him.”

Shelia Hall, Project Manager, Allens Cross Community Association commented: “There is no doubt that a large part of the project’s success is due to the Ecocentre’s knowledge, enthusiasm and experience. The involvement of the Ecocentre ensured that the project got off to a flying start from day one. It has proved to be a great success that is valued by local residents and users alike.”

The showcase comes at an important time for Northfield Ecocentre, as they move towards becoming part of an independent charity. Later in the year they will form part of ecobirmingham, allowing the organisation to grow their work across the city.

Michael Addison, Director of Northfield Ecocentre added: “The world is changing and so are we. We are excited the Northfield Ecocentre will become part of ecobirmingham during 2018. A new, independent charity that will create inspiring projects to engage and encourage people across the city to live more sustainably.”