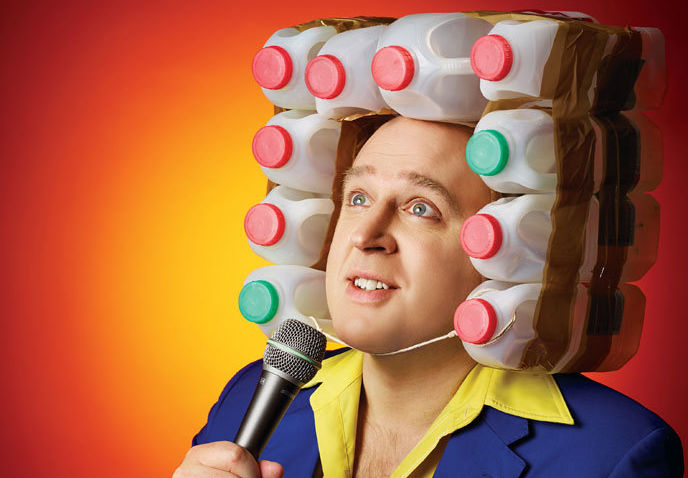 Richard Lutz is given a lesson by the master of the one-liner.

One of my sisters-in-law always greets me with the same warning. She snaps: “Shut up before you open your mouth”.

That’s because I am burdened with a terrible fusillade of bad jokes- flaccid zingers, rancid anecdotes, puns that burst out and immediately lie flat on their backs.

I go see the master: Tim Vine- the quickfire comic who once won the dubious world record for telling the most jokes in an hour (550).

His act at Birmingham Town Hall is a jet stream of manic daftness. He  roars onto the stage with a plastic ice cream on his head (“Nice cone-over. don’t you think?” ) and then launches into a marathon schtick. There’s songs, lots of props, constant banter with the crowd and, of course, those unending jokes: funny, whacko, daft, some groaningly bad, some effortless:

Vine is relentless, his knack is giving the impression that he’s teetering on chaos, barely holding on. But like past masters, such as Tommy Cooper and Frankie Howerd, he is totally in charge. And, all done with an innocent charm, no bad language, nothing venomous. You could bring your six year old. He’s the court jester of a mad stage, even when the non-stop schtick is closing.

“Sorry,” he breathlessly gasped after 75 minutes. “I was going to tell you my lemon juice joke. But it got squeezed out.”