In 2016 Birmingham City Council launched a public consultation into their masterplan for the redevelopment of the Birmingham Wholesale Markets site, located just south of the Bullring. BCC envisaged a future mixed use of retail, residential, offices, eateries, a brace of public squares and some undefined cultural activities. All very predictable I guess. In response I posted on this website that they should abandon the masterplan and simply lay out a park, one where you could walk a dog, kick a ball around, sit on a bench, enjoy an ice cream in a tearoom.

It seemed a radical idea for such a prime central location and one that I had suggested more in hope than expectation. I thought little more about it until recently when I read about a social media campaign, CityPark4Brum which was also calling for the creation of a park on the markets site, a campaign that has so far attracted over 5,000 petition signatures. 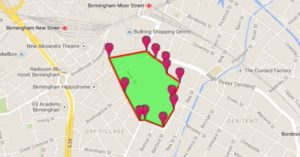 This campaign has not been entirely unsuccessful, with BCC agreeing to incorporate a grass and tree-lined corridor into their revised masterplan (although the total amount of greenery promised still appears to be very modest). The masterplan refers to this as a linear park, which I’d estimate to be around 100 yards long by 20 yards wide (in contemporary park-speak, linear commonly means narrow).

In essence it’s a truncated boulevard, it’s greenery roughly equates with that of two other city centre green spaces – Chamberlain Gardens, largely obscured behind the Library of Birmingham, or Eastside City Park, laid out near to Millennium Point to great civic and media fanfare in 2015, but whose short life is soon to be curtailed as it is destined to be mostly swallowed up by Birmingham’s HS2 rail terminal.

Apart from the grounds of St Philip’s Cathedral, and St Paul’s on the edge of the Jewellery Quarter, there is almost no useable green space in or near Birmingham city centre. Taken as a whole Birmingham probably has more parks than Venice has canals, but the central core and its immediate surrounds – where the population is rapidly increasing (and will continue so to do) – remains bereft of anything resembling a park.

In criticising this glaring deficiency, it’s easy to cite London and its’ array of Royal Parks, dotted liberally around the centre of our capitol city. Yet one need look no further than Birmingham’s geographical neighbours to realise how notable Birmingham’s lack of a gloriously unstructured and unregulated, egalitarian central zone park is: Coventry (War Memorial Park), Solihull (Tudor Grange, Brueton and Malvern Parks), Walsall (Arboretum), West Bromwich (Dartmouth Park) and Wolverhampton (West Park) all boast large parks on the periphery of their centres, easily walkable from their respective retail and civic hearts.

So the centre of Birmingham needs a park or equivalent large acreage of green space, and the importance of bringing such a vision to fruition should not be underestimated. Done well this has the potential to be one of the defining and lasting projects of 21st century Birmingham. As impactful on the city as staging the Commonwealth Games or the arrival of HS2, providing every citizen and every visitor with a gift that truly would keep on giving, day after day, decade after decade. A place for relaxation, exercise, for cultural and communal experiences, where the city can celebrate and commemorate and which can be enjoyed without cost by rich and poor, young and old, as much a destination as any of Birmingham’s shopping malls, cultural institutions, sporting venues or nocturnal hang-outs.

Such a space would change perceptions of Birmingham in a way that 25-30 additional 25-30-storey high new buildings never could. National and even international perceptions that still imagine Birmingham as the motor city, as an unattractive urban sprawl, full of underpasses, flyovers and rain soaked concrete.

Identifying the requisite portion of vacant or convertible land in a city where the options for creating such a space are hugely limited would likely involve a substantial expansion of the city centre. Yet once laid out, it would inevitably attract around its’ hinterland a raft of new build and regeneration projects, meaning that the park itself would require the highest possible level of legal protection from the tentacles of future developers keen to trim its edges with construction projects.

If such an amenity is to be created then Birmingham’s civic leaders urgently need to get with the program. One glance around the city centre, one look at the Council Planning Department’s recent, current and future workload demonstrates the number of construction projects planned or underway in the central core. In a year or two there may simply be no parcels of land available on which to develop a central park, with future generations left to gaze on a plethora of apartments that they will not be able to afford to rent, hotels that they will never need to stay in and offices that they will probably never be needed to work in.

And nowhere will there be for them to walk their dogs, kick their footballs or relax with their friends whilst enjoying their ice creams.