Christmas in Birmingham campaign to attract seasonal visitors for Christmas and beyond. 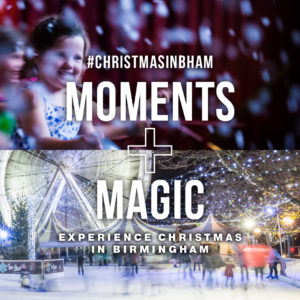 Thousands of visitors are expected to descend on Birmingham this Christmas, as the city’s vibrant, festive offering is showcased through a new destination marketing campaign entitled Experience Christmas in Birmingham.

Led by the city’s official tourism programme Visit Birmingham, in partnership with Birmingham City Council and Retail BID Birmingham, the campaign will span the Christmas period and into the New Year. Combining creative visuals of Birmingham’s iconic Christmas backdrop, a new interactive microsite, consumer competitions supported by marketing and PR activity, Experience Christmas in Birmingham will target potential visitors across the UK.

The city’s festive line-up will kick-start with the opening of the Birmingham Frankfurt Christmas Market on 16 November (which runs until 24th December). The Big Wheel and Ice Rink are also returning to the city, which will be situated at Eastside Green, near Millennium Point (16th November 2017-7th January 2018).

Christmas-themed activity will take place across the city, ranging from festive weekends at Cadbury World, and Christmas at the Movies at CBSO. The award-winning Blue Man Group, a show brought to the city by the Town Hall and Symphony Hall Group, has chosen Birmingham’s ICC as the exclusive UK venue as part of its worldwide tour. A spectacle of art, music, and comedy, the show will run from 28-31 December until 2-6 January.

Visitors are also encouraged to explore Birmingham’s bustling shopping scene, with the Bullring offering extended opening hours in the run up until Christmas. Festive menus from the hundreds of city-centre restaurants, including the seven independent Bitters ‘n Twisted venues across the city, offering cuisine ranging from South American to contemporary classics.

Emma Gray, Director of Marketing and Communications at Visit Birmingham, said: “We welcome visitors from far and wide to experience Christmas in Birmingham. Everyone can join in the festivities – ranging from stunning productions from the likes of Blue Man Group, the City of Birmingham Symphony Orchestra and the Birmingham Royal Ballet, to the largest authentic Frankfurt Christmas Market outside Germany and Austria.

“Working with our campaign partners, promotional activity will also extend beyond Christmas, highlighting the breadth of Birmingham’s offer in the New Year and beyond – from major events including the IAAF World Indoor Championships taking place in March, to world class shopping and Michelin star restaurants”.

“We’re the only city outside the capital to boast the big five department stores; Harvey Nichols, Selfridges, Debenhams, John Lewis and House of Fraser, which will see the return of its popular Santa’s Grotto after being given a magical makeover. Add to this the Frankfurt Christmas Market, and the city centre shopping scene is a unique, special experience.”

“Christmas is a fantastic time for people to experience all the city has to offer in terms of culture, entertainment, food and shopping – and a warm Brummie welcome.”

For more information on Birmingham’s Christmas activities, or for information on accessibility, parking and safety, as well as the Birmingham Christmas map, visit www.christmasinbirmingham.com. You can also follow the hashtag #ChristmasInBham on Twitter.