Talking to Suggs from Madness and writer Tom Firth about musicals and the middle of our street. 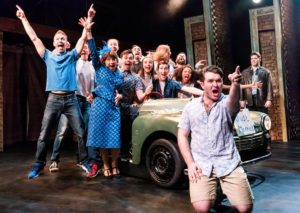 The West End smash hit musical Our House returns to Belgrade Theatre, Coventry this November, fifteen years on from its original launch date, and 35 years since the release of the title track by Madness. With this Olivier-award winning show back out on tour and heading for Coventry, we spoke to the creative team behind the madness, including composer Suggs and writer Tim Firth about the enduring success of this spectacular show.

When you first launched Our House in 2002 did you ever imagine it would still be playing to packed houses?

Suggs: “I couldn’t imagine it’d still be playing, not really, but anything is incremental. I remember when we did a gig with Madness way back when and 40 people turned up and I remember thinking we’d made it then. But it’s a real privilege in the same way it is for Madness to still be playing. It’s a real privilege that people still love the Our House musical. I’ve been to see a few musicals recently and some really good ones, but I don’t think many of them are better than Our House. So, in answer to your question, no – I’m not surprised it’s still going.”

Tim: “What’s great about the fact that it still is on is the fact that there’s something in the story that speaks to continuous generations. This was never a musical that was locked in time and that was what was so terrific and has consistently proved to be terrific about the music – that I always felt that the songs of Madness existed outside time, even though they started during the big ska movement when I was a kid.

“The songs were written slightly to the left of that. They were influenced by that but they were not bound by it so consequently they still play, they’re still used, the band still tours and not for no reason – genetically they have a longevity to them. So here we are with kids rediscovering the Madness songs, rediscovering the catalogue, 10 or 15 years later – which is fantastic.”

Tim, what was it about Madness’ music that made it ripe for a musical?

Tim: “I’ve always said that from the moment I got the first phone call I said that’s the only one that I can absolutely see working because I knew that they were a band who spent as much time on their lyrics as they did at the piano and the guitar. There was, I suspected, a musical buried in all of those lyrics – like you were looking at a mosaic of a story that had been shattered over six or seven albums. And it proved to be true. I wanted to find the musical that they didn’t know they’d written.”

Suggs, did a Madness musical feel like a good fit?

Suggs: “Yeah, we’d been talking about it for some time. We weren’t unaware of the fact our songs are quite narrative and we’d even sort of dabbled ourselves with the obvious – you know, we wrote songs about going to school, we wrote songs about your first girlfriend, we wrote songs about living in the house in the street you were brought up in. But we found it much more difficult than we realised and that’s when Tim got the phone call.

It’s a very different discipline to writing songs and writing albums. We always tried to write albums that had some sort of narrative arc, for want of a better pretentious phrase, but to try and fit that together into a story that actually made a lot of sense. It was a really incredible process to watch unfold.”

What inspired the storyline?

Tim: I took all the lyrics, all of the songs, and spread them around the floor and read all of them over a period of three or four days and found there were a lot of songs about duality – it’s about this and there and the opposite, the sun and the rain.

“They were there all the way through so there was something that was kind of niggling me about a dual story, a story that had two sides to it. When I thought ‘You can do I Like Driving In My Car and it’s a Morris Minor but it’s also a Bentley or a Jag” I then thought ‘We’ve got a two-channel story here’.”

Suggs, is there anything of you in the character of Joe Casey? 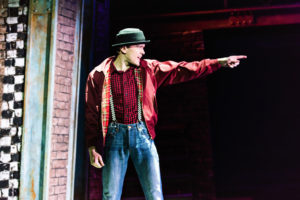 Suggs: “An interesting thing that Tim did is that he spent quite a lot of time with us, just hanging out – I couldn’t even say interviewing us but just hanging out and chatting as he was starting to advance this idea. If you wanted to know anything about Madness you’d do what Tim does, which is listen to the songs. The interviews we did were pretty much irrelevant compared to the amount of truth that’s in all those songs.

Tim: “The truth is that the only point of writing a musical is for characters to sing things that they can’t say and what Suggs said is true – you can say things in interviews and you can say things in a pub over a Guinness but what you say in your songs is very different. They’re defined and sculpted moments of thought that maybe you wouldn’t say. They’re barings of your soul, if you like, and even though they’re funny and witty and they may seem to be universal they’re incredibly personal things. In a way the songs were always saying what maybe the writers didn’t say publicly, which is why they’re precious.”

How do you account for the success of the show?

Tim, you have two shows in the West End and two shows going on tour in the UK. How does it feel to be one of the UK’s most prolific musical theatre writers?

Tim: “Musicals were always what I wanted to do. I grew up listening to them and I got slightly sidetracked into writing plays and films. Like I’ve said, for me musicals aren’t universally great. Sometimes they’re very lazy and I never want my stuff to be that – I want it to use music, to really use music, not just have music in it, because music is a catalyst and it accelerates the narrative and it means that you can say many, many things much more quickly than you can in a straight play. So for me it’s the most exciting medium to be in. I would happily spend the rest of my life doing this.”

Suggs, all the songs in the show must be dear to your heart, but do you have a favourite reinterpretation?

Suggs: “When the show actually opened it did seem seamless and it’s hard to separate them now because there are so many that cross over. There are four or five times in the show where songs cross over and it’s almost unnoticeable to somebody who wouldn’t know those songs but it happens a lot. It Must Be Love is a great one, where there’s narrative while the song is playing intercut between the boy and the girl. It happens a lot and I couldn’t say there’s a favourite for me. There’s a lot of great moments of that.”

Have you appeared in the show yourself?

Suggs: “Yes, I have appeared in the show myself. I played the Dad for a month or so, who is a kind of ghostly character who looks down on what’s going on around him and is trying to give his son Joe some direction about the fact his own life went completely wrong – which is a very bizarre feeling for me because I was the father of a lot of these songs and I was trying to direct them to go in the right direction and lo and behold they did. As for appearing in the show, it’s a very terrifying experience and a very humbling experience.

How does it feel to be called a national treasure?

Suggs:“Cor blimey, that’s bizarre, isn’t it? I think it would only really work for us if they put us on the empty plinth in Trafalgar Square dressed as clowns.”

And we just have to ask, growing up was your house in the middle of your street?

Suggs: ” he one I’m living in at the moment is, yeah, because it’s much more difficult to burgle if you’ve got a house in the middle of the street. You’ve got a lot of back gardens to climb over. Bit of good advice for you there if you’re looking to buy a new house.”

Tim, you’ve said about Madness: “They came from London but they spoke to every corner of the nation”. Do you think that’s why Our House is such a hit around the country?

That’s again part of the reason that they’ve lasted the way that they have. I’ve said it many times but it’s extraordinary the degree to which I have not got sick of these songs because I’ve listened to them more than the band have and still if Our House comes on the radio I wouldn’t switch it off.”

With this new tour, what do you hope audiences will feel when they leave the theatre?

Suggs: “Quite right! I do believe – and it’s another cliché but it’s true – that it is the sort of show where there’s so much going on it’s hard to take in the first time. You can watch it and enjoy it and listen to the songs and do all that stuff you do with any musical, then you can go back and you get another layer and another layer. I’ve watched it a lot of times and I’d say we get asked 20 or 30 times a year if people can put on amateur productions. I try and see a few of them if I can and, a bit like Tim with my songs, I never tire of seeing the work that he’s done with our songs. It’s got endless depth, I think.”

Our House runs on the Main Stage at the Belgrade Theatre Coventry from Wednesday 8th–Saturday 11th November. Tickets are available now priced from £22.50 by calling the Belgrade Box Office on 024 7655 3055 or visit www.belgrade.co.uk.