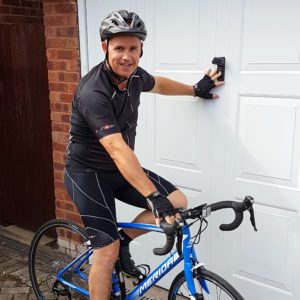 A big-hearted engineer from the Midlands is to cycle 300 miles through South East Asia for charity.

Rodney Clarke, aged 52, will be joining an 18-strong team from across the UK in cycling from Saigon in Vietnam to Angkor Wat in Cambodia over six days starting on October 28 to raise money for Challenge Cancer UK.

Having smashed his individual target of £3,000 in only three months, he is leading the field with pledges of more than £4,750 and is now aiming to clock up £5,000.
The ride has been organised by the Cannock office of one of his employer’s suppliers, air conditioning installation specialist Coolair Equipment Ltd.

Coolair led a similar expedition in 2015 that raised £90,000 for Challenge Cancer UK, which splits the donations it receives between ten national cancer charities.
Rodney, who lives in Rugeley and works in Solihull for building services provider Dodd Group, will face the challenges of cycling for up to eight hours a day along narrow paths and unmade cross country tracks in stifling heat and humidity as part of Team Coolair.

He has been preparing for the event with weight training and by taking part in monthly Midland cycling events. Having recently completed the 35-mile Sportive Peak Epic in the Peak District, he is now planning to cycle the 60-mile Warwickshire Sportive on September 2nd.

Rodney said he only took up cycling last year to get in shape for his daughter Amelia’s wedding this summer – and has been feeling the benefit: “Cycling has changed my life and I am totally committed to it. I am delighted to have lost two and a half stone in weight, and I eat and feel better than I have ever done.”

He added: “The invitation from Neil Gibbard of Coolair to join Team Coolair came at just the right time when I was losing weight for the wedding. When Neil also told me that it would involve raising money for a charity that distributes funds across the range of cancer support, I didn’t hesitate in signing up. After all, we all know of families, friends and colleagues who have been affected by cancer.”

Rodney’s fundraising success, he said, has been down to persuading his employer’s subcontractors and suppliers to sponsor him in exchange for having their logos on the T-shirts he will be wearing: “I offered a sole sponsorship option and the take-up has been so great that I’ve had to have twice the number of shirts produced.”

He also donated a four-ball at the Forest of Arden as an auction prize at Coolair’s recent charity summer ball, held at Aston Wood in Sutton Coldfield, which raised £4,750 towards the bike ride.

Neil Gibbard, Coolair Regional Director and the event organiser, said: “Rodney has been leading the way in raising sponsorship money for our bike ride as we aim to raise a record-breaking six-figure sum this year for such a great cause.”