Ballet pops up at New Street. 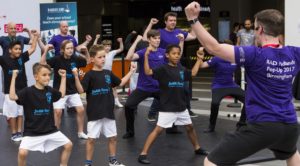 Visitors to Birmingham New Street station had more than trains on their minds last Sunday afternoon, when approximately seventy dancers, aged between 6 and 17, took part in a op-up performance organised by the Royal Academy of Dance.

The event was hosted by presenter Dean McCullough and featured performances and masterclasses by some of the RAD’s best dancers.

RAD Examiner Paul Doyle led warm-ups while Nicky Agnew, an RAD Registered Teacher from the region, led syllabus demonstration classes for each grade. The classes showcased the bread-and-butter work of the RAD and gave a flavour of what happens inside dance lessons for the very young (Primary) through to the proficient learner (Advanced).

Meanwhile, RAD Registered Teacher Judith Florey-Meah introduced ballet as a warm up activity for the boys in her husband Youssif’s junior football team. The team demonstrated the warm up alongside Judith’s sons Elijah and Malaki from Team Project B – a nationwide campaign by the RAD, which aims to increase the proportion of boys taking part in dance activities by 2020.

Paul Doyle taught a segment of the Project B choreography, which has been created by Birmingham Royal Ballet Principal Dancer and RAD Male Dance Ambassador Iain Mackay, to all the boys and men in the audience, while Hamish Scott performed his self-choreographed Dancers Own piece from the 2016 Genee International Ballet Competition. Hamish won bronze at the Genee and will be joining Birmingham Royal Ballet next season.