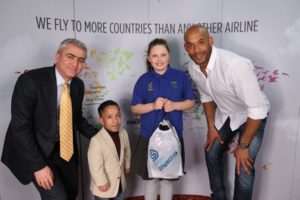 Over 1,000 young sporting stars descended onto the fields of King Edwards School and King Edward VI School for Girls for the Turkish Airlines Birmingham School Games on Friday 14th July 2017.

Guests of organisers Sport Birmingham, the Yafai brothers came through the ranks of Birmingham City ABC and spoke to the whole crowd at the opening ceremony and answered questions.

Inspired children from Abbey Primary Catholic Primary School won the opportunity to sit down with and interview the brothers whilst other schools competed in sports such as netball, golf, handball, rounders, cricket, tennis, boccia and new age kurling.

“It’s been great to be here and build these kids’ confidence in sport and we just really enjoyed the whole day!” confirmed Galal Yafai, who revealed he was a Birmingham City fan.

The brothers were highly involved in the activity zone which featured rowing, cycling, inflatables and boxing. After watching children perform in over a dozen sports and signing hundreds of shirts, the brothers joined sponsors Turkish Airlines and Sport Birmingham staff in medal presentations and volunteer awards

Sport Birmingham’s CEO, Mike Chamberlain was really pleased with how the Yafai brothers had gone down with the children. “They’ve been a real hit both in both the Winter and Summer School Games Festivals. It’s fantastic this band of brothers have chosen to give back so early in their careers by inspiring Birmingham’s talented young athletes!”