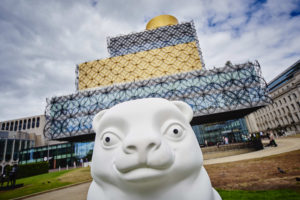 Birmingham Airport has signed up to sponsor a bear this summer in the exciting Birmingham art trail The Big Sleuth.

Presented by Birmingham Children’s Hospital Charity in partnership with creative producers Wild in Art, The Big Sleuth will see up to 100 beautifully designed bear statues appearing throughout Birmingham over a 10-week period this summer from July 10th with satellite trails in Solihull, Sutton Coldfield, Sandwell and at Resorts World.

The Big Sleuth aims to inspire people to become a tourist in their own town. Bears will be placed not only in the city centre, but in a host of locations across all ten districts of Birmingham, encouraging residents to follow the trail and discover areas of the wider region which they may not have explored before.

The design chosen by the Airport is called Solar Polar and is painted by artist David Graham. The design represents the famous Northern Lights or ‘aurora borealis’. The bright dancing lights of the aurora are the result of collisions between electrically charged particles from the sun that enter the earth’s atmosphere and can be seen in the sky.

Solar Polar will be centrally located in Victoria Square until September 17th, and during this time a selfie competition will be run by the airport to encourage the public to find the bear.

David Winstanley, Chief Operating Officer at Birmingham Airport, said: “It’s a fantastic privilege to be involved with another city art trail project. The Big Hoot in 2015 attracted many visitors not only to the city and region but also to the airport.

“We jumped at the chance to be a sponsor again and we are really pleased with the bear design that we have chosen. It is very relevant for Birmingham Airport seeing as we have four Icelandair flights a week to Reykjavik, a gateway city for visitors of the Northern Lights. It’s a really exciting time for Birmingham and the Airport and this project is set to captivate the city, attracting thousands of new visitors to the region.”

Elinor Eustace, Deputy Director of Fundraising at Birmingham Children’s Hospital, added: “The Big Sleuth is incredibly important to us as we know it will encourage residents and tourists to get active and enjoy being outdoors – whether they decide to walk, jog, run or cycle the trail.

“We are absolutely delighted to have Birmingham Airport involved, as thanks to them and our other corporate partners we will ultimately be able to fund some important projects for the children and young people at our hospital and for that we’re immensely grateful.”

Charlie Langhorne, Director of Wild in Art, commented: “It’s fantastic to have Birmingham Airport on board again this year. They recognise the great benefits of getting involved as well as the positives for the local community, and of course Birmingham Children’s Hospital. Together with other sponsors, partners and funders, they have enabled the event to really take off!”

The Big Sleuth comes hot on the heels of The Big Hoot, which attracted more than 800,000 visitors and in total raised over £625,000 for Birmingham Children’s Hospital. At the end of the ten week trail the giant painted bears will be auctioned off with all proceeds going to the hospital. To find out more about the project, visit www.thebigsleuth.co.uk