As Birmingham steps up its attempt to host the 2022 Commonwealth Games, Steering Group Chair Ian Ward talks with Steve Beauchampé.

What made Birmingham decide to bid for the Commonwealth Games when it had previously said that it wouldn’t?

“If you think back to what the 2002 Commonwealth Games did for Manchester, it allowed them to leap ahead of Birmingham and we’ve been playing catch up ever since. Hosting the 2014 Games allowed Glasgow to transform part of their city and they are now an exemplar of how to deliver legacy off a major sporting event. So this bid gives Birmingham an opportunity to deliver some of its housing and transport infrastructure needs, create over 12,000 jobs through successfully hosting the Games as well as leaving behind a legacy for athletics, turning the Alexander Stadium into the national stadium for UK athletics and at the grass roots level allowing us to invest in sporting facilities that young people in particular would benefit from for many years.

In April, when the feasibility study by Origin Sports was completed, you stated that you were seeking cross-party political support within the city for a bid, followed by Cabinet approval after which details of the Origin report would be placed in the public domain for people to comment on the bid. Where are we with those things? 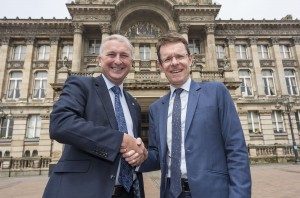 “We do now have cross-party support with both the Conservatives and Liberal Democrat groups on Birmingham City Council backing this, as is Andy Street, the new Metro Mayor. We also have the support of the Midlands Engine and the three Local Enterprise Partnerships which cover the region, so all of the building bricks are in place. Our bid is based upon the feasibility study, although we are still undertaking some work on the costings and we will be making some announcements shortly about how we are to pay for the Games, along with details of the venues.”

Are you going to appoint a Bid Chairman as your only UK rivals Liverpool – who appointed former Football Association Chief Executive Brian Barwick – have?

“I don’t that’s likely. We’ve set up the Birmingham Commonwealth Games Bid Company and I believe that we have the right people involved to deliver our bid. If we are successful then we will move on to create an organising committee which will be a different make up of people, getting the right skills to be sure that we can deliver the Games.”

The Alexander Stadium in Perry Barr is going to host the athletics and both the opening and closing ceremonies. What are your redevelopment plans for the venue?

“We’ll invest in the facility, building it up to between 40-50,000 seats (current capacity is approximately 12,800) but after the Games we’ll remove the temporary seating and reduce to a capacity of around 25,000, creating a stadium as good as any in the world for hosting international athletics meetings such as the Diamond League and national championships, Olympic Trials etc. We’ll also be investing in other sports facilities around the stadium environs for the local community to utilise.”

This is very much a West Midlands bid though. How will that aspect manifest itself?

“Some of the venues will be spread across the West Midlands, but this is also about creating opportunities for local businesses. The Glasgow Commonwealth Games generated 12,000 jobs and £670 million of first tier business contracts, and I believe that we can match or even surpass these figures, and we want to see local firms getting most of that business.”

Birmingham describes its bid as a “low cost, low risk” games. Couldn’t that also be seen as an austerity games?

“Low cost, low risk are the UK government’s requirements for 2022, but they also say that they want high quality. We’ve already got 95% of the facilities in place so we can deliver on low cost and low risk, but we can absolutely deliver on high quality too, as we have before with such events as the World Indoor Athletics Championships in 2003 [the Championships return to Birmingham next year]. The IAAF still refer to 2003 as their best championships ever and I believe that we can also stage the best ever Commonwealth Games.”

You first have to win the backing of the Department for Culture, Media and Sport, and later the Commonwealth Games Federation. What is the Birmingham ‘wow’ factor that could help persuade them to back the city’s bid?

“Our diversity and our youthfulness. We’re the youngest city in Europe with 40% of our population under 25 years old and there’s at least one representative of each of the 71 Commonwealth nations living here. So where better than youthful, vibrant Birmingham to host the 2022 Commonwealth Games?”

And what’s the timescale as regards the bidding process?

“We submitted our preliminary questionnaire last Friday and are scheduled to receive a visit from the Commonwealth Games England/DCMS Delivery Unit next month. Providing that we get through that stage (we should know by late July) we then go into the second phase in August which runs in parallel with the Commonwealth Games Federation, the international body who are ultimately decide who becomes the 2022 host city. We expect a decision from the Delivery Unit by September, and if they support Birmingham, which I believe that they will, then the Commonwealth Games Federation will reach their decision sometime in late Autumn.”

To find out about Liverpool’s bid visit www.liverpoolCG2022.org