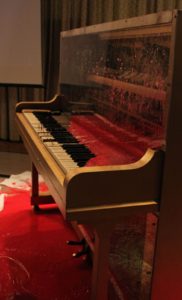 Two days of creative anarchy are set to bring down the curtain on Birmingham Conservatoire’s Brutalist Paradise Place home. The two-day CODA marathon of new and experimental music takes place on 19th-20th June, with performances every two hours from 11am to 11pm each day.

A festival of bold and daring composition, CODA will be the very last public event to take place in the building prior to its demolition, and the Conservatoire intends to mark the occasion in style.

Michael Wolters, Deputy Head of Composition, says: “The Recital Hall has been many things to many students and staff over the years. For us, the composers, it’s been the space where we could try things out, present the most cutting-edge ideas in front of a handful of people or a crowded house. It seemed only appropriate to programme two days of events that show a snapshot of the incredible creative potential at the Conservatoire.”

Featured events include some existing pieces, such as Andrew Hamilton’s The Spirit of Art and Michael Wolters’ Requiem (commissioned by BCMG in 2015) featuring a pre-recorded and live solo singer capturing what the composer describes as “the loneliest situation I could think of”.

Andy Ingamells’ messy and beautiful Piano Recital uses a glass-fronted piano which is played whilst being filled with coloured wallpaper paste until it stops working. Other events have been especially created for CODA: Seán Clancy and Simon Goff’s Fade in/Fade Out for electronica and violin, Howard Skempton’s lecture on form, Paul Norman’s Paganini Caprice (reconstruction) as well as lots of new compositions for trumpet, for speaking pianist, for piano duet and also for player-piano (pianola).

Other highlights include Birmingham City University’s Afrocuban Jazz Orchestra’s Grupo Paradiso! and Liam Noble whose gig featuring Birmingham Conservatoire’s jazz students also forms part of Monkathon, a 9-day celebration of the centenary of Thelonious Monk. CODA ends with the fittingly-destructive Finale that literally begins the demolition process by chiselling into the walls.

Birmingham Conservatoire, which is part of Birmingham City University, moves to its £57 million state-of-the-art new premises in Eastside in September.