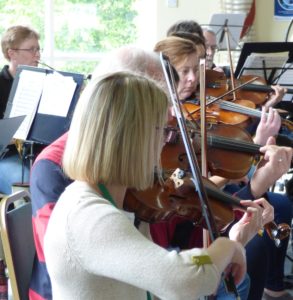 There are two weeks to go until the Battle of the Somme Centenary Tour arrives at Worcester Cathedral on Saturday 17th June at 7.30pm. The screening will be accompanied by composer Laura Rossi’s live soundtrack performed by the British Police Symphony Orchestra.

The event in Worcester is one of the last dates on The Battle of the Somme Centenary Tour. Composer Laura Rossi and Dr Toby Haggith, Senior Curator at The Imperial War Museum will give pre-performance talks about the battle and the musical score. The British Police Symphony Orchestra have been working hard to ensure they do justice to Laura Rossi’s incredible score, with the final rehearsals planned for the day itself.

Composer Laura Rossi said: “It was only after I had started working on this project and decided to visit the battlefields that my aunt told me my great uncle Fred had served on the Somme, and showed me his diaries. He was the only one of his pals in France who did not get killed. He was a stretcher-bearer, attached to the 29th Division on 1st July 1916, so it is possible he may even appear in the film. Discovering this close family connection, visiting the battlefields and witnessing some of the commemorative ceremonies this year made the whole project come to life for me; the battle feels much closer and I have a better appreciation of what it must have been like to be a solider on the Somme.

“I have watched the film so many times that when I sleep at night I sometimes see the soldiers’ faces! Watching this film brings you closer to the reality of the First World War, and I have come to feel very passionately that I want others to know more about it.”

Paul West, former Chief Constable of West Mercia Police and a member of the British Police Symphony Orchestra said: “To be part of such an incredible commemorative project as The Battle of the Somme Centenary Tour is a huge honour for the British Police Symphony Orchestra. Our first rehearsal was particularly poignant, watching the film and beginning our work to learn the score. It will be a privilege to play our part in remembering the sacrifice of those who gave their lives during not only the Battle of the Somme but the whole of World War One.”

Somme100 FILM is an international project, working with the International War Museum, as part of the First World War Centenary Partnership to mark the anniversary of the Battle of the Somme. The project has brought together 100 live orchestral performances of the iconic 1916 film The Battle of the Somme with composer Laura Rossi’s acclaimed score, all performed within the anniversary year of the Battle.

Shot and screened in 1916, The Battle of the Somme was the first feature length documentary about war and changed the way both cinema and film was perceived by the public. It was made by British official cinematographers Geoffrey Malins and John McDowell. In the year of its release around 20 million people, almost half the population of Britain at the time, watched The Battle of the Somme many hoping to see the image of a loved-one, or friend captured on film.

Tickets cost £20 & £15 and are available from Worcester Live 01905 611427 with all proceeds going to The Royal British Legion, ABF The Soldiers’ Charity and SSAFA The Armed Forces Charity.

For more information about how Worcestershire is commemorating World War One, including the event on 17th June, visit ww1worcestershire