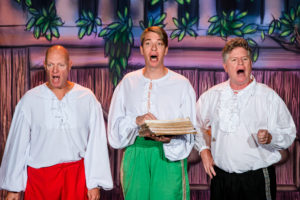 Acclaimed stars of the West End stage, the Reduced Shakespeare Company, bring their barnstormingly irreverent new production to Birmingham Repertory Theatre for the first time from Tuesday 14th–Wednesday 15th February. Following its world premiere season at the Edinburgh Festival, the brand new show is a breathtakingly hilarious celebration of our cultural heritage – as seen through the eyes of three Americans wearing trainers.

In a better-late-than-never nod to the Bard’s 400th anniversary, the ‘bad boys of abridgement’ present this new play by the man himself, as discovered in a Leicester car park.

Reed Martin and Austin Tichenor, the brains behind Williams Shakespeare’s Long Lost First Play (Abridged) said: “This is our interpretation of what we wish Shakespeare’s long lost play would be. It’s a mash up of all the most famous characters and famous speeches, brought together in a brand new strangely familiar story.

We love that our shows appeal to everyone, of all ages. No matter what your sense of humor, wild wacky loony whatever, we’ll have something for you. And this new play is no different.”