Birmingham residents vote on wellbeing and hopefulness as part of art project. 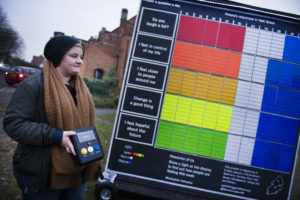 From 28th November to 3rd December across six neighbourhoods in Birmingham, people were asked to participate in a unique creative experiment. measures of us, aimed to creatively and visually start conversations between strangers in different parts of the city to find more opportunities to talk and be with neighbours, to celebrate common experiences and openly acknowledge, discuss and respect differences.

Small electronic voting boxes were hosted by shops, schools, community centres, libraries, cafes, churches and pubs in the neighbourhoods of Boldmere, Colmore Row (city centre), Springfield/Hall Green, Handsworth, Hodge Hill and Rubery. People in these areas were asked if they agreed, disagreed or felt neutral about a different question or statement every day for five days. Questions and statements included “I feel hopeful for the future”, “Change is a good thing” and “Do you laugh a lot?” At the end of each day, the responses from the neighbourhood were displayed in each area as large eight foot tall illuminated artworks by Redhawk Logistica, inspired by cricket scoreboards.

The whole city story came together in a display of the six boards in an installation in Cathedral Square in Birmingham city centre on Saturday 3rd and Sunday 4th December 2016, enabling audiences to compare similarities and differences in the data collected from the neighbourhoods. Audiences also had a chance to respond to all five questions and light up how people feel in different parts of the city. Over six days 7,000 responses were gathered across Birmingham.

measures of us was devised by artists and produced through creative collaboration at Birmingham Cathedral, with churches and people of all faiths and none, and in partnership with University College London. It was a continuation of Something Good, an arts programme and creative enquiry, which brought together diverse artists and communities to celebrate the Cathedral’s 300th anniversary in 2015.

Findings will not only help shape Something Good’s future work in the city but also feed into research by ICRI Cities: Intel Collaborative Research Institute for Sustainable Connected Cities and UCLIC: University College London Interaction Centre led by researcher Lisa Koeman. measures of us was the first time researchers have deployed easy-to-use and engaging community technologies, such as the voting boxes at a city scale. The study will enable them to learn which aspects of technologies, like those used in the project, affect community engagement.

The project has already had a positive impact in the neighbourhoods in which it has been hosted, with the questions and statements chosen for each day encouraging and provoking people to think, have conversations they wouldn’t otherwise have; exchange reflections, neighbourhood histories as well as political discussions. When the boards were brought together in Cathedral Square, audiences openly discussed the data asking questions such as “Why does Rubery laugh the most?” and “Why do people in Handsworth feel closer to people around them?”

Revd Tom Thomas, St. Christopher’s Church, Springfield, one of the project’s partners said: “Being able to measure the sense of wellbeing of a community, is a very exciting idea because a lot of interventions seem to focus on problems, of what is lacking. The results have given me insight into my community I didn’t have before.”

Sharon Watkins, owner of Gracie-Mai’s Tea Room in Rubery, one of the voting box hosts added: “It has given me good insight into my area. For me personally this has been a bit of an eye opener so far, to the point that I now want to proceed with it and do something, to organise events within my business in order to bring people in my community together.”

ne voting box responder said, “I am surprised that not everyone in Hodge Hill feels as positively as I do. It has really given me something to think about.’ Another said, ‘It is brilliant to see areas involved in this project who never normally have a voice”.

For more information on the project visit www.somethinggoodbham.org or on Facebook