Fancy a short break not too far from the madding crowd?

One of the great things about living in Birmingham is just how easy it is to drive a short distance and find yourself in a completely different world. A couple of hours on the road could see you anywhere from deepest Herefordshire to Cheshire, to the Cotswolds, which was where we headed for a bonus night away in Stow on the Wold, as guests of boutique hotel The Sheep on Sheep Street.

We’ve only ever been to the Cotswolds and back in a day before, which means that we’ve missed out on some of its pleasures. Taking the long way round, we skirted Stratford-upon-Avon and headed to Shipston-on-Stour. Despite its bijou appearance, there were lots of options for lunches and copious provisions for picnics. We opted for the latter, and headed off to visit the Rollright Stones.

The Rollrights include a stone circle, the number of stones in which is up for debate. Certainly a good excuse to have any accompanying children count them several times, while you occupy the very comfortable bench and just drink in the view. Along the footpath are the Whispering Knights, with the enormous King Stone in a field across the road. www.rollrightstones.co.uk/

On the way back home, we headed to Broadway for a meander through its charming shops, and its even more charming dog population. The best moment was undoubtedly the greeting between a gangly black Labrador pup, and a stately kinsman, who had managed to snaffle a biscuit by means of that famous “starved I am” look.

No journey south would be complete without a stop off at Hillers Farm Shop near Ragley Hall. Although they have a mighty fine café with a daily specials board, and a magnificent collection of salads, we didn’t have time or appetite to spare, and instead stocked up at the Farm Shop itself. The shop stocks Ragley Estate meats, and locally grown fruit and vegetables. At the moment, look out for plums, redcurrants and blackcurrants, strawberries and heritage tomatoes. There’s also a garden centre and a gift shop for further treats.

Stow on the Wold itself is a beautiful small market town, perched on top of Stow Hill. The town sits at the junction of seven major roads, including the Fosse Way, and was the centre of the Cotswolds wool industry. At its peak, 20,000 sheep could be sold in one day, which may account for the enormous size of the market square relative to the town.

We stayed, aptly enough, at the Sheep, on Sheep Street. The initial appeal of the pretty Cotswold stone building and its duck egg paintwork was even more enhanced by the discovery that is has a car park, thus avoiding that activity known as the Stow shuffle for a parking space. We did arrive at the peak time in the peak season, so the town was bustling with visitors. 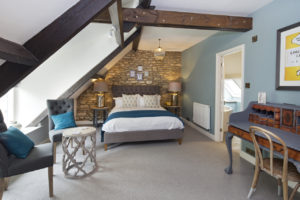 We were shown to our room on the top floor of this rambling building, overlooking the green at the bottom of the main street and a mere twenty or so steps from the centre of town. The Sheep has been carefully renovated, so that rooms contain all the amenities you would hope to find: a large bath, a shower so powerful I was scared to press the ‘boost’ button, Nespresso maker, a duvet fabricated from clouds and some very stylish décor. Although the building is a warren of rooms slotted with great dexterity into the eaves of three seventeenth century buildings, excellent and yet inconspicuous signage makes finding your way around very easy. The rooms are spacious, with comfortable and eclectic furnishings.

Bracketing our sleep in that magnificent cloud-like bed were two excellent meals. With one of our party having food allergies, we were prepared to undertake some careful questioning. However, having mentioned this when booking, we were immediately presented with a gluten free menu, which was annotated to take into account other food allergies. I should note at this point that there was a choice of at least half a dozen items per course, a significant cause of excitement for those of us unaccustomed through dietary constraints to such bounteous choice.

For starters, we opted for gambas pil pil, which arrived in a waft of garlic, and three fine scallops on the shell, served with crispy bacon and peas. For a main, we opted for the house speciality of pizza, along with a generous salad. From the gluten free selection, a Malaysian butternut squash and aubergine curry was served with coconut rice and a side of chilli greens with garlic. One of us managed to accommodate dessert, while the other slumped down into the nest of cushions at her seat and whimpered with pleasure into her Americano. 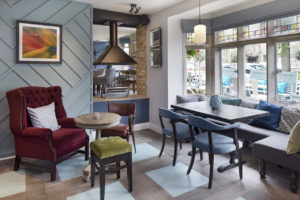 We were pleased to see that there were many local diners in the restaurant, the Sheep having clearly built up a following within the community. The pizza oven was getting good use throughout the evening, and burgers are also clearly a speciality well received by diners. The same principle of local patronage held true at breakfast the next morning, with a number of meetings being held at neighbouring tables.

Breakfast itself was also a thing of great beauty. The standard buffet table had some decidedly above average offerings. Apricots were poached in a vanilla syrup, with blueberries and strawberries and other fruits available alongside and a good variety of breads. From a number of cooked breakfast options, we chose the full English, which included an option for gluten free sausages. Breakfast service is open until a very civilised 11.30, giving you time for a little shopping or a constitutional in the town beforehand to work up your appetite.

Staff at the Sheep were warm and engaging, and we can definitely see ourselves returning.