Richard Lutz joins the wedding party for The Marriage of Figaro.

When you consider what a startling production Welsh National Opera served up last year for its Magic Flute, this season’s The Marriage of Figaro comes across as a bit staid and half-conceived.

While the former was a multi-coloured madcap combo of A Clockwork Orange and a Beckett play, the latter is comfortably set in the rococo period as if Mozart himself had his hand in design and costume. Yes, the voices were a pleasure to hear, especially Elizabeth Watts’ two arias as Countess Almaviva as she breaks her heart over the anguish of love. 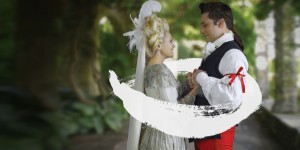 But music aside, there are problems here in this production at the Birmingham Hippodrome. To have the well-intentioned cast warming up in modern street clothes over the opening overture and placing the opera as a conventional production within a production is a bit unneeded. Why do this when Mozart’s swelling music can surround and envelope an audience?

It is as if director Tobias Richter wants to illumine the staginess of the performance which is part of a WNO Mozart trilogy now touring. Two flat walls combine, divide and separate and, with the help of huge side mirrors, allow you to see singers coming on and off stage – as well as scene shifters. Is that necessary? To summon up the theatrics and colour of an opera and not revel in it seems misconceived.

An audience pays hard cash to see and, of course, hear the magic of The Marriage of Figaro. But to play around with the total package in this way is questionable and adds nothing to the hard working voices of Welsh National Opera.

Hats off though to costume designer Sue Blane for her sumptuous eye to 18th detail. And a round of applause for soprano Anna Devin as the love interest Susannah who weaves her way around a frantic plot that seems to be a template for many a bedroom farce to come.