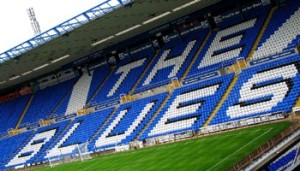 This was a game when the away team started off at a frighteningly high tempo for the first ten minutes before Blues took almost complete control for the rest of the half. All looked set fair when Donaldson calmly planted the ball in the far corner of the opposition net in added time.

In the second period Blues could easily have scored a second , as Wednesday’s defence creaked and groaned but it wasn’t to be. The turning point on a treacherously muddy pitch came through two substitutions – Fabbrini for Blues and Nuhlu for Wednesday. To be frank, the Blues defence, already twisted and turned by an impressively elusive Forestieri, couldn’t cope with the physical presence of the Wednesday sub who, in turn, opened up space for Hooper to show his undoubted marksmanship.

Meanwhile Fabbrini came on and danced to little effect in this rumbustious contest. Every time he was touched he went down as if he had been shot by a sniper then on the third time of asking the referee decided that he had seen enough and played on, enabling Wednesday to break away and score with Fabbrini being brushed off the ball in the middle of midfield. This doesn’t make him a bad player but shows that there will need to be an acclimatisation process .

Maybe playing two wingers left us too exposed and Davies (or Fabbrini) should have been on from the start but hindsight is a wonderful thing. There were some outstanding performances including the undoubted man of the match Caddis, and Toral. Unfortunately, the midfield were poor with Gleeson looking a long way from his ambition to play for Eire. In fact, much as it hurts me to say it, the ex-claret and blue Bannan ran the midfield and despite his diminutive stature still managed to be head and shoulders above those in blue.

Grounds also was less than impressive and his distribution can only be described as shocking, perhaps on a par with Kusczak who has still yet to completely convince.

Unfortunately once we went a goal down, Blues went into ‘pussycat’ mode and never looked likely to have the edge and desire needed to get something, which overall we surely deserved, from the game. Still, it’s not a disaster although after ‘only’ drawing at Bristol City the social media was almost poisonous. So before the footballing trolls get into overdrive, maybe they need a reality check.

We are a top ten side but anything else is a bonus which, given the paucity of resources, we should still be thankful for. Anyway, we’re still only three points of the play off places and now have two eminently winnable games starting at Rotherham.

All is not necessarily lost!