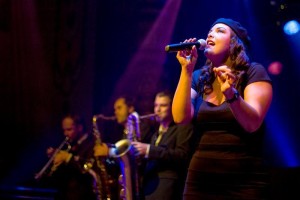 The Dutch pop and jazz singer, sporting an eye-watering multi-coloured top, knee-length black skirt and high heels, was so captivating that she had the majority dancing to her up-tempo retro-feel repertoire.

The Shocking Miss Emerald, as she calls her second album, certainly surprised from the start as a dreamy instrumental introduction on a blacked-out stage was interrupted by a spotlight on the right ledge of the circle where Miss E opened the singing with The Other Woman, about the anxiety of being a mistress.

Moments later it was “Clear the way boys, the lady has arrived,” as the sonorous star joined her superb six-piece band up front singing Absolutely Me, after which her current UK tour is titled.

Clearly impressed by the venue (“It feels a lot like the Royal Albert Hall,” she declared) Caro Emerald – born Caroline Esmeralda van de Leeuw – and her band breezed through 21 tracks of irresistible easy listening in an almost two-hour set on the first of a two-night appearance at the concert hall.

Many of the songs were from the Shocking album, including her new single Quicksand, and her 2010 multi-platinum debut album Deleted Scenes from the Cutting Room Floor.
From the bossa nova style Riviera Life to the funky escapism of Back it Up that launched her career when she was asked to sing it as guide vocalist, Caro brought a summery feel to a winter evening.

When she spoke of her love of touring (“like a fun school trip”) it was the cue to clap along to her ode to luxury luggage Pack Up The Louie, before the tempo eased to the beautiful smouldering Black Valentine.

As tributes to her influences, Caro gave superb renditions of Shirley Bassey’s History Repeating and Meghan Trainor’s All About That Bass, the latter also a self-deprecating anthem to big girls like herself. Just One Dance showed off the dazzling keyboard skills of Caro’s musical director Stephen Long before the punters put on their dancing shoes for the infectious swinging rhythm of Liquid Lunch.

From then it was non-stop jiving as Caro rock and rolled through You Don’t Love Me, That Man, and Stuck with her band doubling up at times on saxophone, trumpet, keyboards, accordion and guitar.

The encore saw Caro return clad this time in a gltzy sequined dress and French-beret style hat but the energy remained relentless for Tangled Up and her new reggae-style song Helicopter Boy, with the evening ending on the rousing Latin song that brought the most cheers, A Night Like This. You couldn’t help but notice the looks of joy on people’s faces as they went away afterwards. It was as if they themselves, in the words of the song, had “never dreamed a night like this”.