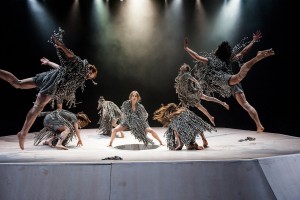 Richard Lutz takes his pew for a mesmerising piece at Birmingham’s Dancexchange.

The production begins with wriggling bodies as they slither out of a central hole in a flowing raised fabric. The only noise is a constant drone of industrial music. Slowly, and I mean very slowly, eight dancers emerge and continue what seems to be an evolution from reptilian  animal to proto humans.

Yama, at an hour long, presented by Birmingham’sDancexchange and created by The Scottish Dance Theatre is simply one long movement as the octet clothe themselves and reveal their heads and faces, which for half the programme are cloaked by long wigs and face masks. They slowly acknowledge each other’s existence, couple, uncouple, sway to music, become aware of the world around them.

Then, away they go back into their black pit.

if this sounds anything at all like birth, life and death, then so be it. To an audience it is simply mesmerising. And like any good story, whether  a novel, computer game or movie, the key is not knowing what will come next. You really don’t until the eight disappear with a sound track that faintly hints at the human voice.

Choreographer Damien Jalet refers to his piece as reflecting the myths and rituals  of the Japanese mountains. Could be, but to me it is simply a fiercely muscular piece that hypnotises the audience.

Scottish Dance Theatre, which has taken this production overseas from its base in Dundee, were greeted by a standing ovation at The Patrick Centre. A fitting reaction. An hypnotic piece.