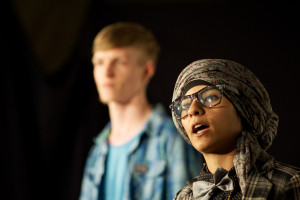 Level UP, now in its fourth season, is Birmingham’s most ambitious series of spoken word poetry nights, taking place monthly at Birmingham Repertory Theatre, aiming to bring the best performance poets to Birmingham, and to encourage local emerging talent.

Organised in conjunction with Birmingham’s own Beatfreeks and Apples And Snakes, the nation’s leading organisation for spoken word, it will feature some of the country’s very best poets, including Jodi Ann Bickley, author of One Million Lovely Letters, and the highly acclaimed Lemn Sissay MBE.

This season will be hosted by ninth Young Birmingham Poet Laureate (2013-2014) Lauren Williams, from Great Barr, alongside local siblings, Callum and Melissa Bate, also known as Prime Poetry, who will host an additional series of free satellite workshops throughout the city.

New this season, on select dates, members of REP Foundry (the theatre’s artistic development programme) will assist with the direction of some of the performances.

The featured artists for each event are as follows.

Headline: Jodi Ann Bickley
In 2011, to help her recover from serious illness, Jodi started writing letters to strangers facing their own struggles to tell them not to give up hope. Now aged 25, Jodi has written more than 1000 letters, and her words are changing lives around the world. She lives in Birmingham and One Million Lovely Letters is her first book.

Emerging: Caleb Femi
Caleb Femi is a poet, English teacher, a member of the SXWKS collective and winner of Roundhouse Poetry Slam 2015. His work, often described as vivid and honest delivered with an essence of musicality, mostly focus on his experiences of a British-Nigerian.

Headline: Talia Randall
Talia has been commissioned by major venues such as the Roundhouse to make cross-arts theatre shows, has collaborated with filmmakers to make award winning poetry-films and performed across the UK. She is also an experienced community worker and runs her own spoken word and theatre-making workshops at various institutions including the Royal Academy of Arts, The Roundhouse and schools across the UK.

Emerging: Jay O Poet
The 22 year old poet hails from Birmingham and has been writing since the age of 8; starting with short stories, flirting with hip hop and then branching to poems. Now it’s all bundled up together and comes out at gigs and studio sessions.

Headline: Andy Craven-Griffiths
Andy Craven-Griffiths is a writer, rapper, musician and educator from Leicester. He has performed on Radio 1, Radio 4, and BBC 2, and had work commissioned by the Arts Council and Rethink mental health charity, run poetry workshops for over 20,000 young people, and has a chapter in the forthcoming book, Making Poetry Happen.

Emerging: Jade Richards
Jade has been commissioned by BBC WM and BBC Outreach Birmingham to write and perform for BBC Birmingham’s new digital campaign #BrumVotes and has interned with BBC 1Xtra, helping to produce Words First. Jade’s latest achievement is being commissioned by The Big Hoot 2015 to have one of her poems featured on an owl.

Headline: Sabrina Mahfouz
Sabrina Mahfouz is a Sky Academy Arts Scholar for poetry; an Associate Artist alumni at the Bush Theatre; Poet in Residence at Cape Farewell – a climate change and arts organisation; a Global Shaper with the World Economic Forum and a Writer at Liberty for the civil rights charity, Liberty. Her first collection of plays and poems, The Clean Collection, is published by Bloomsbury.

Emerging: Samuel King
Samuel has performed around the UK sharing his diverse, yet humorous concepts and perceptions of life. Having received media attention from the likes of the Guardian and Huffington Post, Samuel is recognised for his thought provoking, impactful poems.

Emerging: Ronak Patani
Actor and poet Ronak is the joint winner of the Roundhouse Poetry Slam 2013 and graduated from the Central school of speech and drama in 2014. Born in Kenya, raised in England then India and now living in London, his work reflects his experiences of these different continents.

Headline: Lemn Sissay
Lemn Sissay MBE is the author of several books of poetry alongside articles, records, public art, and plays, including the stage adaptation of Benjamin Zephaniah’s Refugee Boy. He was an official poet for the London Olympics and has recently been made the new Chancellor of the University of Manchester.

Emerging: Rehema Njembe
Local poet, Rehema has worked extensively with Apples and Snakes, MAIA Creatives and Beatfreeks. Her work is optimistic and aims to make a difference.