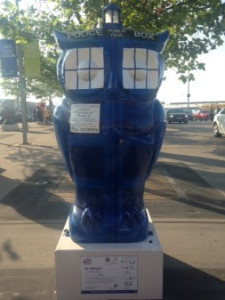 After weeks of secrecy, London Midland’s Big Hoot owl will be materialising in Birmingham on Monday.

Dr Whoot will take up his perch at Birmingham Snow Hill station on 20yh July as part of the city-wide fundraising event lasting ten weeks. London Midland has sponsored the owl in aid of Birmingham Children’s Hospital’s The Big Hoot event.

Dr Whoot is the creation of artist Stephen Mckay from Liverpool, an avid Whovian. His Dr Whoot design is inspired by the famous blue Tardis, the time travel machine of Doctor Who.

To Stephen, Birmingham will forever be linked to the classic TV series Dr Who. Throughout the 1980s he visited the Dr Who conventions in Birmingham to meet the stars of the show.

Whovians will also know that there is a strong link between London Midland and the man from Gllifrey.Eight out of the 12 actors who have played the Doctor in the TV series were born on the London Midland network:

Drop by and say hi to Dr Whoot at Snow Hill station from Monday 20th July.

To find out more about all of the owls featured in the Big Hoot go to www.BigHoot.co.uk