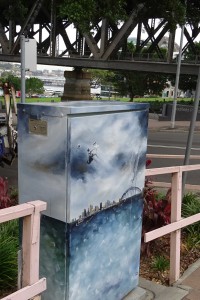 Artists from across the West Midlands are being invited to come up with ideas for how to decorate the route of the Midland Metro extension in Birmingham city centre.

Centro, the region’s public transport delivery body, has teamed up with public art organisation WERK to invite expressions of interest for designs for three location cabinets.

Location cabinets house signalling and telecommunications equipment to control tram movements, and the extension will see three installed along the route between Birmingham Snow Hill and New Street railway stations.

Councillor Roger Horton, Centro lead member for rail and Midland Metro, said: “Other cities around the world utilise street furniture and transport infrastructure in this way, they can be significant platforms within the public realm that contribute to first impressions of a city.

“The West Midlands is a hotbed of artistic and design talent so we thought this would be a great way of showcasing it.”

The boxes will be located next to platform stops in Bull Street, Corporation Street and Stephenson Street, and the extension is due to open by the end of 2015.

The brief is open to emerging and established artists and the successful entrant will win £1,000.

WERK is an independent not-for-profit public art organisation based in Birmingham whose previous projects have included the public art strategy for the regeneration of Birmingham Coach Station – The Boundary by Rob Colbourne and Stuart Mugridge, and A Hundred Thousand Welcomes by David Sherry and the Longbridge Public Art Project.

Anyone interested in taking part in the Midland Metro scheme should send a written expression in response to the brief, maximum of 700 words, by July 20th.

It should include any supporting image references, a CV and biography and four images of previous work.

Submissions should be sent to info@werk.org.uk or visit www.werk.org.uk for more details.