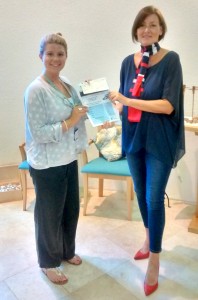 Big-hearted employees at the Aston headquarters of a leading building services provider pumped themselves up to raise £2,960 for a Worcester hospice.

The JS Wright staff and directors raised the impressive sum for St Richard’s Hospice after taking part in the Great Birmingham 10K Run and holding a raffle on a fun day for their colleagues and families.

All the proceeds have gone to St Richard’s, the adopted charity of JS Wright for 2015, as the award-winning company celebrates its 125th anniversary year. The lion’s share of £1,610 was raised by a team of ten who successfully pounded the streets of Birmingham along with 7,000 other runners in the city’s first 10K run.
Their finishing times were good enough to win third place in the men’s category and ninth in the overall mixed category of the event’s Business Challenge.

Other funds came from an in-house tombola and a garden party at Castle Bromwich Hall Hotel that included a raffle to win prizes donated by suppliers and the opportunity to throw wet sponges at the company’s directors seated in stocks.

Lizzie Brazier, Community Fundraiser for St Richard’s Hospice, said: “We are so grateful to the team at J S Wright who took part in the Birmingham 10k run to raise money for the Hospice. “JS Wright has raised a fantastic amount of money and the Hospice will benefit from this hugely; for example, it costs £2,195.15 to provide complete care for a patient in our In-patient Unit for five days.”

Angie Swann, Head Office Receptionist who presented the cheque to St Richard’s on behalf of JS Wright, said: “The aches and pains of taking part in the 10K Run were all worth it by enabling us to raise, along with the funds from the fun day and tombola, such a huge amount for such a worthy cause.

“A huge thank you goes to all those sponsors and supporters who enabled us to raise the money. We are already looking to build on that figure by organising further fund-raising activities throughout the year.”