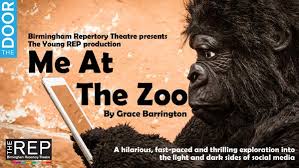 Me At The Zoo is a hilarious, exciting and innovative show that looks at how accurately people project themselves within the realm of social media, compared to how they actually function in the real world. The play is not only incredibly relevant; it is exceedingly timely as day-by-day social media becomes a larger part of people’s everyday lives.

The play deals with four vulnerable people who are each seeking the validation and popularity online that they perhaps lack in their normal day-to-day lives. However, one ambitious boy is determined to prove to the world that such online power is superficial and destructive. Charlie Bottle believes he can prove that the virtual world is destroying the lives of his generation, but in his quest to prove so, reveals that reality is not much kinder.

Grace Barrington says of Me At The Zoo, “I hope that Me At The Zoo highlights a lot of problems that are manifesting within the Internet, but also demonstrates that it is not just the fault of the online constructs, but very much the people behind them. Being behind a screen offers us a mask and a strange level of protection, and so my aim is to question why this added safety makes us behave so differently.”

Director Tom Mansfield, says, “What makes this special is the fact that Me At The Zoo is written by a former Young REP member, Grace Barrington. It’s Grace’s first full-length play and it’s a real honour to be directing it. Unlike me, Grace grew up in a world pervaded by social media, so the scenes that she’s writing reflect her and her friends’ own experience of what the world is like for young people in the digital age. It’s a really sharply observed piece with a huge amount to say about the world, but it’s also very funny and fast-paced.”

Grace is from Bournville and attended Kings Norton Girls’ School. She joined the Young REP in 2004. This is her debut play.