Richard Lutz reviews a play that emerges from the refugee camps of the West Bank. 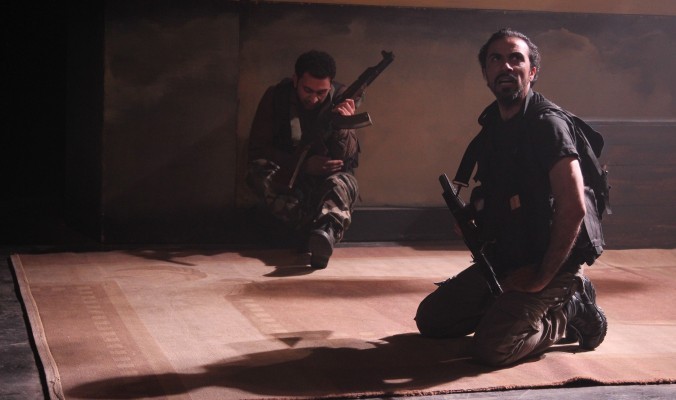 This is a play about politics, and it can be difficult separating its hardline take on the thorny Middle East problems or whether it’s simply a good play, a thoughtful play, whatever your stance on the Israeli-Arab conflict.

Freedom Theatre emerged from the refugee camps and it is no surprise that it takes a deeply anti-Israeli narrative. But a telling  and moving one too.

The plot twists around a real event 13 years ago when armed Palestinian fighters holed up in the sacred Church of the Nativity in Bethlehem. Hemmed in by soldiers, hungry, sniped at by sharpshooters, the men lasted 39 days along with 200 priests, nuns and churchgoers caught up in the bloody confrontation. Finally the fighters received safe passage and the siege ended.

Inevitably, the story, produced at The Birmingham Rep’s Door Studio is about the inner conflict among the men. There is the idealist, the romantic, the wounded warrior, the rationalist, even the one who thinks of little but eating a good meal washed down by a Sprite. If that can sound stereotypical and trite, it must be noted that the men’s profiles are based on real people and the ensuing interviews with them in their exile.

But it is partisan polemic. Little is said about the Christian men and women under siege, much less what Israel may think of it all, but with the aid of tightly edited  video special effects it does re-create what must have been a claustrophobic and terrifying episode in the besieged’s lives.

The play is fuelled by understandable anger, well expressed; The Siege leaves you with a taste about what races through a Palestinian’s heart when faced with overwhelming odds and their take on history.