Terry Wills enjoys the latest production of The Producers. 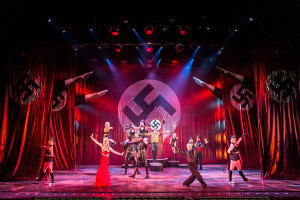 A single word can sum up this theatrical version of Mel Brooks’ 1968 film masterpiece – ‘hysterical’.

Rarely have I sat among a first night audience that for two and half hours had been so entranced that they only left the theatre after reluctantly realising that if they wanted to see more, the only way was to come again another night. Non-stop applause and cheers for a production that deserves the highest accolade.

For those unaware of the storyline it revolves around Max Bialystock, a Broadway producer who has seen his latest production labelled an overnight disaster. When his accountant Leo Bloom (himself a budding producer) remarks that he would make more profit from a flop than a hit, Max realises that if he can persuade numerous ageing ladies to provide the cash that can be banked in his name that would do the trick.

He persuades Leo to join him as co-producer and together they read countless drafts of plays to discover what could be turned into a guaranteed flop. Mission accomplished. A play written by Franz Liebking, an escaped Nazi who fondly reminisces the virtues of Adolf Hitler in his wacky draft Springtime for Hitler.

Perfect – a guaranteed flop. All that’s left is to buy the rights to his play and bingo, let the fun begin. Auditioning for the worst possible singers the production has its opening night. Max and Leo anxiously await for press reviews and are horrified to discover the production described in glowing terms.

The result of the failed scam? Get along and see it for yourself.

The production, as described, IS hilarious.The stage and dancers draped in Swastika insignia, Hitler with his trademark moustache ascending the stage, huge pointed arms Seig Heiling the Fuhrer. And all this topped by the whole cast singing and dancing to the theme song Springtime for Hitler.

A splendid cast; Jason Manford (Leo Bloom) , Cory English steals the show as Max Bialystock, Phil Jupitus (Franz Liebkind) and Tiffany Graves as seductive dancer Ulla.
Louie Spence, so recognizable from his many stage and television roles, cannot be faulted. Camping up magnificently he had the audience eating out of the palm of his hand.

The Producers is non-stop fun, although it may be considered by some as rekindling memories of happenings during the Second World War. I can remember them vividly but that makes no difference. This is a comedy musical that only a genius such as Mel Brookes could dream up to entertain, whether on screen, or in this case for an appreciative Alex audience.