Spotlight exhibition taking place at the Library of Birmingham. 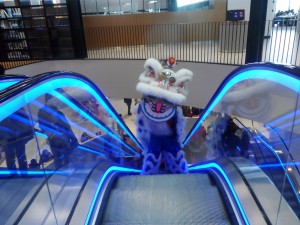 Lions have been dancing in celebration of the British Chinese Heritage Project/Chinese Lives in Birmingham Spotlight Exhibition at the Library of Birmingham this week. The free display will be on show for three weeks during the Easter period (2nd-25th April).

During Easter weekend in a first for the Library of Birmingham, Chinese Lion dancers paraded up and down three floors of Europe’s largest public library last Saturday. Much to the delight of audiences both young and old, the lion started on the ground floor at the Spotlight exhibition area, then through the foyer, and all the way up the escalator onto the Discovery terrace- and back down again. Children queued to take photos with the lion afterwards, as well as enjoying the accompanying free Kids Quiz.

A legacy project for the city, the project was created to capture the hidden histories of Birmingham’s Chinese community after being awarded a grant of £35,600 from the Heritage Lottery Fund. It was permanently archived in the Library of Birmingham last year, following a 15-month long project journey.

The project was officially launched at The Cube in May 2014, followed by a free, pop-up exhibition for the public at the Barber Institute of Fine Arts (May-June 2014). To celebrate the project completion, the exhibition was then displayed at Wing Yip Superstores, Nechells during September-October 2014. A first of its type in the West Midlands, the exhibition has drawn thousands of visitors during five months of display, with hundreds of page visits to the blog from over 45 countries.

Anna Yim, CEO of Chinese Community Centre Birmingham said; “We are delighted to have created this historical project – and that the Library archives can now help reflect the lives of individual migrants and British Chinese, as well as the development of the Chinese community in Birmingham.

More than 25 volunteers were involved in over 2,150 hours of work. One volunteer even donated one year’s worth (1,620 hours) of pro-bono time to the project.

The project blog contains an eight minute documentary-style video depicting the project journey. Other project outputs include a bilingual booklet, DVD, bilingual hardback photobooks as well as audio recordings of the interviews, all of which are now archived for future generations to look back upon. Most of the outputs are also available to view on the blog electronically.