Sir Howard Elston reports on the first chapter of the White House battle and basically repeats what is in the headline above.

Ms Clinton said: “The National Health Service which includes hospital care and family doctors is what we need here in the States.” 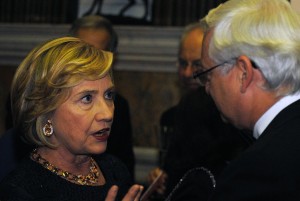 Ms Clinton talking to someone with white hair 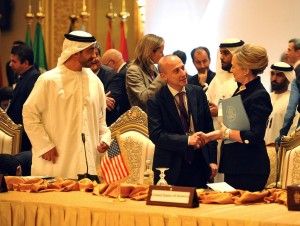 Another picture of Ms Clinton to make the article more visual

“In order to provide care for my fellow voters, I will fund this NHS and basically buy it off the shelf to help Americans from Alabama to Arkansas to Armenia or..to anywhere else that begins with the letter A.”

Continuing, she added in a sitdown 1-2-1 hush-hush top table knees up at a slap up breakfast at a down and dirty no holds barred interview with me: “Both Mr Cameron and Mr Miliband and that other guy who is always smiling and is a Lib-dumb are always banging on about the NHS.

“But, heck, we need more than words if we’re gonna buy the whole barnyard and relocate it to the United Snakes.”

On other issues, Ms Clinton also said she will adopt wee Nicola Sturgeon as her stepdaughter to placate the Scottish independence movement. She will eradicate crime in UK cities, wipe out the big bucks British debt and both stop and encourage immigration at the same time to bolster the sagging UK economy which is both blossoming and flailing depending who you are listening to.

“Britain is important to me,” she adlibbed from a script, “It is part of me. I was brought up on Monte Python. And we basically own your soggy little island anyways.”

Ms Clinton is an officially ravishing 63 year old blonde, wife of Bigdawg Bill Clinton and cites paragliding, needlepoint and wrestling as her hobbies, was First Lady, state senator, Sec of State, chief rabbi of Seattle and astrophysicist to the stars before throwing her hairdo into the White House ring this week

2 thoughts on “Hillary to “buy the UK’s health system””