Richard Lutz takes along his opera glasses for Mozart magic in Birmingham.

When the opening scene includes a giant lobster trying to edge its way onto the stage from a series of doors, you know this performance of The Magic Flute at the Hippodrome will turn an eye or two.

Director Dominic Cooke takes the Welsh National Opera into the world of surreal painter Rene Magritte with endless clouds of scenic design, a orange-suited chorus complete with bowler hats and umbrellas and doors upon doors that stud the endless cloudy sky. 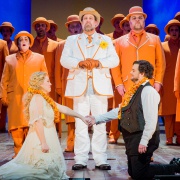 Into this surreal world comes Tamino fighting the monster of his inner dark world. And also into this topsy turvy world comes comic bird catcher Papageno.

And to additionally decorate this fantastical opera by Mozart through the doors, possibly the doors of Huxley’s Doors of Perception, come the host of fabled characters: The Queen of the Night, Sarastro the white suited hero representing the new horizons of Mozart’s beloved Freemasonry and Papageno’s new love Papagena who transforms, as quick as a note from a magic flute, from old hag to a Raymond’s revue bar babe.

On his deathbed Mozart seemingly fantasised that he was at a performance of his beloved opera. But what would he have thought of this WNO attempt?

The chorus, decked in orange, pop their heads through trapdoors to summon up a Beckett-like nightmare, the doors are everywhere and the great arias bounce around the huge Hippo theatre. Too much spoken libretto does slow the opera down, the English (rather than German) is clunky at times.

But great voices from  Birmingham-trained Samantha Hay as the dark Queen of the Night  and a clownish cheeky Papageno (Jacques Imbrailo) )  allows this colourful Magic Flute to flow quickly. It is charming and daft.

Until 6th March, then touring.