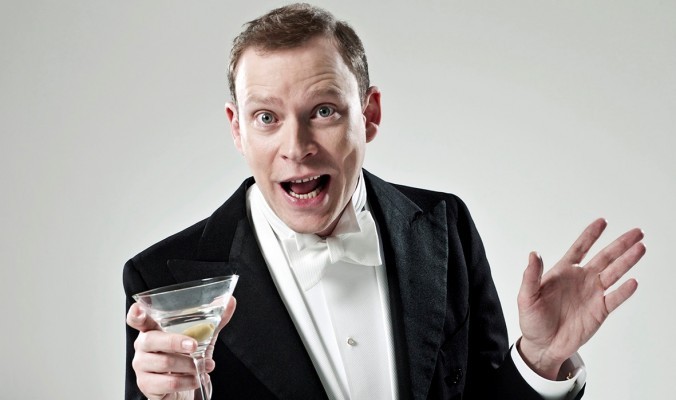 Richard Lutz watches PG Wodehouse properly turned on its head at the Rep.

This Wodehouse-inspried comedy is called Perfect Nonsense. And it is joyful, madcap and, as a Liverpudlian might say, mad as a sandwich.

Three actors (Robert Webb, Jason Thorpe and Christopher Ryan) throw  costumes to the wind as they create at least ten characters in a whirlwind of changes. So, first hats off (literally) to the behind the scenes folks who have to transform actor Jason Thorpe, for instance from the soberly kitted out Jeeves to an upper crust deb to a myopic blueblood stumblebum pal of good old Bertie Wooster all within minutes, if not, at times, seconds. Magic stuff.

The play keels sharply toward the anarchic, the plot long forgotten within ten minutes of the curtain rising. Robert Webb (Peep Show) creates his own feather-headed Wooster, saying hello to the audience and asking us to give him time to tell a damned fine story.

Of course, he loses his jumbled train of thought within seconds and must be rescued by the unflappable Jeeves. Time flips around, Wooster forgets if he is on stage or part of the surreal story-telling and the trio have the audience in the palms of their gilded hands.

It all descends merrily into well honed slapstick and physical comedy with an able script by the Goodale Brothers leading us by the nose through the Wodehouse-type narrative peopled with folks such as Gussie Fink-Nottle, Roderick Spode, Ms Stiffy, and Dahlia Travers.

The third of the trio Christopher Ryan (Ab Fab, The Young Ones) adds manic sparkle to the proceedings- changing from an 8 foot tall toff, to a minuscule butler, to a rustic cop, to a daft aunt to a range of bumbling valets.

It works. Director Sean Foley creates a night at the theatre where the Marx Brothers are seemingly embedded into that Wodehouse world of perfect nonsense

One thought on “Review: Jeeves and Wooster in Perfect Nonsense”