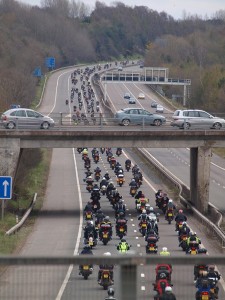 Bikers from Shropshire and the wider Midlands area are invited to start the season off in style on Sunday 26th April 2015 at the Bike4Life Ride Out and Festival.

Bike4Life Festival is being held at the RAF Museum Cosford in support of the Midlands Air Ambulance charity. The event is being run in collaboration with the Safer Roads Partnership and West Mercia Police and this year is being supported by radio station Planet Rock and is set to be the biggest organised biker gathering in the Midlands this year.

Biker Safety is one of the main focuses of the day and there will be the opportunity to speak to The Institute of Advanced Motorcyclists, Royal Society for the Prevention of Accidents (RoSPA) and other trainers to find out more about further training and additional courses that are out there to brush up on your biking skills. There is also the opportunity to sign up on the day for a special offer of a Take Control training course – book with a mate and get the course for half price.

The importance of biker safety is paramount for all partners involved with Bike4Life and the Air Ambulance in particular are fully aware of the role they play in assisting bikers at the most crucial of times.

Mum of three Charlotte Lloyd suffered serious injuries in a road traffic collision while on a motorbike just under a year ago and, as she continues her recovery, she’s praised the “vital” contribution Midlands Air Ambulance made to ensuring she received urgent medical attention.

39-year-old Charlotte suffered a broken leg and elbow when she, as a pillion, and her partner, Marc, were involved in the accident in the Midlands in June 2014. She had been preparing to start a new job the following day when the pair set out on their motorbike on a sunny afternoon and travelled down the Pennine Way, B5080 in Tamworth to meet her younger brother. Suddenly, after missing its turning the car travelling in front performed an emergency stop. As the road surface was very badly broken, the wheels of the bike weren’t able to grip. As the bike started to snake badly, Charlotte was thrown into the air before landing in the road.

The Midlands Air Ambulance helicopter from Tatenhill was dispatched to the scene, with paramedic, Ian Walley, among the aircrew.

Charlotte recalls, “There was a lot going on at the scene and as well as being in a lot of pain I felt very sick. I remember Ian introducing himself to me. He and the rest of the aircrew played a vital part on the day as they got me to hospital so quickly. They worked really well with the land ambulance and explained everything to me and were really comforting and patient, and warned me it might be a little noisy. I was in so much pain and, up to that point; I wasn’t responding to anything I’d been given to try and make that better.”

As Charlotte was experiencing such extreme pain, the aircrew were able to administer advance relief at the roadside before she stabilised and airlifted to the Queen Elizabeth Hospital in Birmingham. Now back home, she is slowly recovering from her injuries but admits the incident had a massive impact on her life.

She adds: “I had never been to hospital before and had to stay for a week, undergoing scans and a session in theatre. I’m still attending physiotherapy appointments there and am awaiting a date for more surgery. Even now I still cannot walk properly or do certain things, and I do find it quite frustrating sometimes.”

However, she was still determined to meet the aircrew who helped her when she needed it most to offer her appreciation and, after travelling to Tatenhill and spending time with the team. “I met up with Ian just because I wanted to thank him and what he did and all of the emergency services did for me that day. I had already known that a lot of bikers are airlifted by Midlands Air Ambulance but I can now truly say that they do fantastic work and help save a lot of lives.”

With hundreds of bikers already signed up, organisers are expecting thousands will show their support on the day and join in the fun, so, if you’re a biker and you’re not already registered for the Ride Out or just want to find out more visit www.bike4lifefest.com or call the Bike4Life Festival team on 01902 376 252. Find us on Facebook by searching for Bike4Life Fest and follow us on Twitter @Bike4LifeFest.

The festival will run from 10:00am to 4:00pm and visitors of all ages, not just bikers are encouraged to come along. Bikers wishing to participate in the ride out MUST have a full licence as the route to the Museum will travel along the M54 motorway.