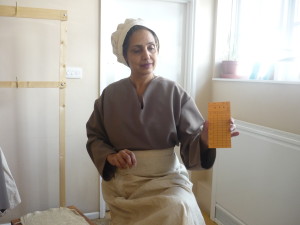 Women & Theatre’s Clocking On invites audiences to experience the ups and downs of a single shift in a Birmingham factory and eavesdrop on the women who kept the factory lines working while men were fighting at the front during World War One. Performances will take place on Sunday 29 March, 3.30pm and 6pm, at Small Heath Baptist Church, Small Heath, Birmingham.

Clocking On is the culmination of Women & Theatre’s heritage research project Women’s Work involving local women carrying out archive and interview – based research which has formed the basis of this production.

Clocking On has been developed by nine local women alongside an artistic team from Women & Theatre. The group developed the performance through a mix of archival research reviewing the remaining BSA documents at the Library of Birmingham; internet research which brought stats and facts on the number of women who worked in factories, transport, on farms and as nurses during World War One; inspiration from female WWI poets including The Girls Battalion by Birmingham women Beatrice Perry; and through a first person interview with Juliet Fletcher whose grandmother travelled from New Zealand to join up as an ambulance driver but due to her short stature and small build was sent instead to work in a munitions factory in Longbridge.

Terina Talbot, Lead artist on the Women’s Work project said: “By the armistice 900,000 women had served in munitions factory and for many women this was the first time they had earned a wage. Through our research and in developing the performance we have explored what it would be like for these women facing the toils of manual labour, dealing with the worry and loss of loved ones serving at the Front, as well as exploring how these women felt about life after the war and if they could go back to how it was before.

An exhibition of the project featuring a costume from the performance, clocking in cards of the characters, poems, photos of women works, a WWI timeline and research findings from the participants will be visiting Small Heath Library, Northfield Library, Birchfield Library and the Balsall Heath Library between April–June 2015. At each library the exhibition will be launched with a 45minute event where participants and a member of the artistic team will talk about the project, the creation of the performance piece and perform a short extract from Clocking On.

Women’s Work is a sister project to successful The Chocolate Soldiers which Women & Theatre created in 2013/14 with funding from HLF. This involved young men carrying out research into the lives and experiences of men like them who lived 100 years ago and were recruited to fight in the First World War.

Women’s Work is funded by Heritage Lottery Fund as well as by Birmingham City Council, The Roughley Trust, The Grimmitt Trust and The Cole Charitable Trust.

For further details of the whole project, the performances or the touring exhibition visit the project blog www.womenandtheatre.tumblr.com