This week’s event from Birmingham Jazz features an ensemble of local worthies. 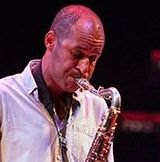 Back by popular demand to the Red Lion on Friday evening is Birmingham’s own heritage jazz band. Led from the front by Mark Hamilton and created by guitarist Ralf DeCambrie featuring Ray Brown on bass and Keith York on drums. All these players had their time playing with the late Andy Hamilton.

From Scratch has its own voice (they started again from scratch) playing an infectious mix of jazz, blues, ska and reggae-based tunes. Leader of the group is Ralf DeCambrie and From Scratch is a saxophone-led quartet, welcoming the occasional guest, in an evening of relaxed bluesy jazz. The group has evolved from Andy’s fondly-remembered Blue Notes, and carry on the memory and legacy of the Birmingham jazz legend.