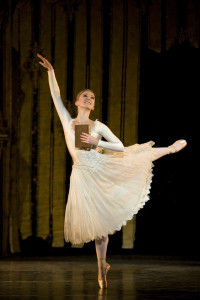 Birmingham Royal Ballet’s production of the Beauty and the Beast is far deeper than just a fairy tale put to dance.

Dark atmospheric sets designed by Philip Prowse, dramatic lighting from Mark Jonathan and a haunting score by Glenn Buhr, create an atmosphere of mystery and suspense in which evil awaits the innocent.

Chairs that move of their own volition, candles that light themselves, and foxes that waltz all add to a world of ambiguity and enchantment. A prince turned into a beast for being a cruel huntsman shows his meanness again when a merchant to whom he has given refuge in his gloomy castle steals a rose. In a scene to shock, the merchant (Michael O’Hare) must bring his youngest daughter Belle to live with the beast or lose his life, launching a battle between the forces of good and evil that is brilliantly choreographed by David Bintley.

Elisha Willis, as the bookish child who wants only a rose when his near destitute father’s ship eventually comes in, brilliantly portrayed the strength of Belle’s devotion and the terror of her predicament on opening night.

Luminous in a gorgeous cream dress, she danced beautifully but it was the performance of Tyrone Singleton as the Beast that brought a tear to the eye. In an intense exploration of the human psyche, his emotional transformation from anger to loneliness, frustration to despair, until the final revelation of his inner humanity, was deeply moving. It was achieved despite his features being hidden for most of the ballet by a mask and a thick costume.

This psychological rollercoaster of a show was heightened by the contrasting comic eccentricities of Monsieur Cochon (Jonathan Payn) – a man as preoccupied with his stomach as he is in deciding on which of Belle’s frivolous elder sisters to marry.

Fiere (Angela Paul) and Vanite (Samar Downs) danced true to their names, and there was a touching performance by Yaoqian Shang as the free-spirited Wild Girl who remains by the Beast’s side as he begins to wane from a broken heart.

In a show with a substantial acting element, the great Marion Tait’s appearance as the grumpy Grandmere was an almost inevitable scene stealer.
At only 95 minutes in length, the show bounds along but you need to allow an extra five minutes or so to read the programme notes on the back of the cast sheet to understand fully what is going on.

The show is in production at Birmingham Hippodrome until Saturday, October 4th.