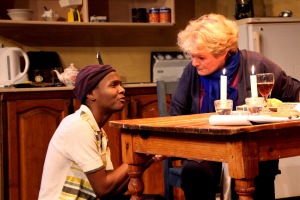 It’s twenty years since apartheid ended in South Africa. So, a timely staging of the South African play Solomon and Marion.

This two-hander has Janet Suzman as a beaten-down lonely woman on an isolated farm halfway between the white suburbs and a black township. South Africa has moved on. But not her. She spends her days struggling with isolation, an absent family and failing health.

Into her narrow worried life comes Solomon (Khayalethu Anthony), a slightly mysterious teenager from the nearby black district. His arrival helps shine a light on the woman’s faint victories and big tragedies in her life. This small play successfully uses this plot to etch big ideas and it doesn’t shirk the remnants of apartheid, current state failure and the vulnerability of a multi race community. The narrow setting takes in these grand ideas and does it well.

Suzman, with her direct lineage to South Africa (her aunt is the late civil rights activist Helen Suzman and she lives near Cape Town) gives a finely-tuned assured portrayal of a liberal but still subtly arrogant ruling white class.

No need to go into the plot. It evolves slowly, effectively. This is a production just right for Birmingham with its ethnic mix.

The play is put on by Baxter Theatre Centre of Cape Town in league with The Rep and is part of the city’s Afrovibes Festival currently staging performances around the city. And it surely is a shining example of what The Rep can offer at its best.

One thought on “Review: Solomon and Marion”