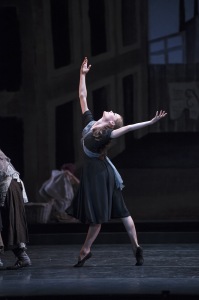 No one is immune to the memories of the two world wars. They marked the last century with blood and, many times, endurance and valour.

Towards the end of the last war, the old Sadler’s Wells company crafted Miracle in the Gorbals about the tough life in the Clydeside Gorbals area of Glasgow. It was part fable, part straightforward narrative about the men, women and children who lived and worked there. It toured Europe, playing in bombed-out buildings and the levelled cities that not so much remembered the vicissitudes and horrors of armed conflict but lived through them day by day, bomb by bomb.

Now this ballet has been faithfully re-created; its newly-fashioned production held its world premiere at the Hippodrome under the guiding light of one of the original dancers, Gillian Lynne.

She says there are not many dancers still around, seventy years later, who remember the routines or even the steps. But Ms Lynne re-created them for this re-introduction of a lost creation. Yes, the storyline may creak with age, the characters a bit old fashioned and stolid. But the backdrop of the giant ship at the quayside and the  stark tenements does invent Glasgow near enough for anyone who knows the city. Pity it isn’t slated to tour north of the border.

There are two other pieces on this triple bill, La Fin du Jour has music by Ravel and choreography by Kenneth MacMillan and in vibrant fey costumes summons up the  between-war years in the ’30’s when the vacuous gentry were gasping their last before the rumble of war erupted. They danced as the armies gathered. A small door opens to a garden as they swirl and twirl. At the end the green garden door shuts.

The third piece, Flowers of the Forest, with music by  Malcolm Arnold and Benjamin Britten is as Scots as a piece of tartan and a can of Irn Bru. It’s hardly as down to earth and realistic as the Glasgow piece. It was more of a Gene Kelly idea of Scotland. But its links with war and conflict are connected to Britten’s own pacifism and the title is from a Walter Scott ballad recounting how the youth of Scotland was mown down in the bloody Battle of Flodden half a millennium ago. In this piece the young dancers, with kilts and acrobatic élan, did reflect a real Celtic spring in the step against a deftly done Turneresque sky painted on the backdrop.