Forthcoming at the Bromsgrove arts centre. 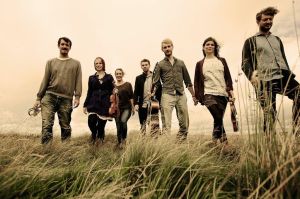 The seven members of The Old Dance School may seem fresh faced, but the diversity and scale of each individual member’s musical journey is quite remarkable. From international jazz festivals to European opera tours, they have performed, recorded and toured with artists such as Martha Wainwright and Cerys Matthews.

The one thing they all have in common is that they were studying at Birmingham Conservatoire in 2006 when they sat in the garden discussing their mutual interest in traditional music forms and decided to form The Old Dance School. They released their debut album Based On A True Story in 2008, winning enthusiastic reviews and Radio 2 airplay from Bob Harris and they’ve been having the time of their lives ever since.

They played at Artrix last year and are back for a return visit with duelling fiddles, soaring brass crescendos, foot-stomping grooves and some of the most ambitious arrangements you’re ever likely to hear. Their new show charts their remarkable journey from ballet school basement jam sessions to headline appearances at international festivals.

In 1994 in New York City, Elana James placed an ad in the music section of the Village Voice looking to join a band, and Whit Smith answered it. By 1997, after founding a much larger Western swing orchestra in NYC, Elana and Whit pared back down to their essential elements and the duo that began as Whit & Elana grew — with the addition of a bass player and a lot of optimism and naïveté — into Hot Club of Cowtown.

Last year they released Rendezvous in Rhythm, an exuberant collection of Gypsy songs and American Songbook standards played acoustically and recorded in the hot jazz style of legendary violin and guitar masters Stephane Grappelli and Django Reinhardt. Recorded last July at the Zone Recording Studio in Dripping Springs, Texas, it’s the Hot Club’s first-ever dedicated foray into the Gypsy jazz and French swing of Paris in the 30s.

Matt Panesh is a writer, performer and producer. Under the name Monkey Poet he has written solo comedy dramas, poetry shows, won international Fringe Awards for and been Nozstock Festival’s poet in residence for the last three years.

In his new play 300:1, directed by the award-winning Gareth Armstrong, a schoolboy re-enacts the homoerotic war film 300 in his bedroom with Wilfred Owen as his Homeric scribe. After the interval, Matt will return as his alter ego, The Monkey Poet.

He has numerous Tv and radio credits, and won the Sony Radio Gold Award for Best Comedy in 2011. And there’s a golden opportunity for those who come along and see Jason’s new show. Unable to come up with a name for the show before he went on tour, he’s asking audiences to give him some suggestions after the performance and the best name, which will be selected at the end of the tour, will win £500.

Think Floyd, dubbed the Definitive Pink Floyd Experience, have been successfully touring the UK and abroad for twenty years and are now well established as one of the UK’s best Pink Floyd tribute show.

A typical Think Floyd show will include all the well-known classics from Dark Side of the Moon, Wish You Were Here and The Division Bell as well as some lesser-known tracks. In all, it’s a stunning celebration of one of the world’s most iconic rock bands.