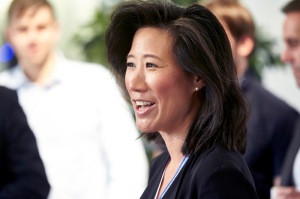 The rising stars of Birmingham’s insurgent tech and creative community were given the opportunity to meet with investors from some of London’s leading funds at an event organised by Marketing Birmingham this week.

The influential investors were in the city for Pitch10@Birmingham, which took place alongside the Business Day of the Conservative Party Conference. Pitch10@Birmingham, at the Library of Birmingham, gave the region’s digital community – from start-ups to scale-ups – the chance to create potential partnership or sales opportunities. It was organised by the tech investor and American entrepreneur Eileen Burbidge. Prime Minister David Cameron, Francis Maude MP and Joanna Shields, Chair of Tech City UK, met with local companies as part of the one day showcase.

Burbidge, member of the Pitch10 advisory panel and partner at London-based, early-stage venture capital firm Passion Capital, said: “With the Greater Birmingham tech scene developing a growing reputation thanks to the calibre of its talented entrepreneurs, it made perfect sense to host our second Pitch10 event in Birmingham. Following the success of our inaugural showcase in Downing Street earlier this summer, the Conservative Party Conference served as a convening force in attracting political leaders and investors from across the country as an engaged audience for the entrepreneurs.

“These events offer rising stars in the digital world a chance to profile their success to date and secure new investment – further building on their development and the dynamism of the wider UK tech scene. We were greatly impressed by the achievements of all the businesses we met at Fazeley Studios.”

Greater Birmingham is currently home to 6,000 tech firms, employing nearly 40,000 people and boosting the region’s economy by more than £1.6bn every year. Surging tech growth contributed to record-breaking levels of inward investment into Greater Birmingham in 2013/14 – with digital firms accounting for a quarter of all investment projects in the city region last year.

Neil Rami, Chief Executive of Marketing Birmingham, added: “Attracting some of the UK’s leading tech figures to Birmingham for Pitch10 was a real coup for the city, building on our recent #techbrum campaign, which shone a national spotlight on our tech credentials.

“It is an exciting time to be a creative and tech business in Birmingham, thanks to the fast growth of this cluster – aided by the city’s vast local talent pool to recruit from, excellent connectivity and affordable property costs. What’s more, major investors are clearly keen to be part of this growth.”

Lucan Gray, Owner at Fazeley Studios & Custard Factory, said:“We were delighted to welcome Pitch10 to Fazeley Studios and allow them to experience at first hand the thriving, world class tech scene that we have in Digbeth and Greater Birmingham.

“The city has made great strides in raising its profile in the national and international tech community, and with the arrival of HS2 soon to put us within 49 minutes’ travel time of London, growth is set to accelerate over the next decade. Birmingham is without doubt a city on the rise and there has never been a more exciting time to be part of its story.”