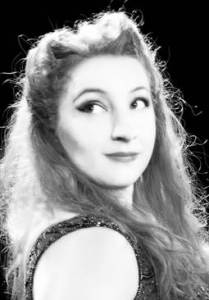 This November, the Old Joint Stock Theatre Company are staging the premiere of a new blues musical, Songs from a Ledge.

Songs from a Ledge is based on the troubled life of fictional jazz ‘n’ blues star Maria Lynwood. Known as the The Wild Child of Blues, the Red Queen, the Little Firebird, Lynwood’s illustrious career spanned the 20th century.

Decades later, her great granddaughter Annalie, lost in life in the 21st century and desperate for something to fight for, receives a box of Maria’s possessions, letters, recordings and memories which changes her life forever…

Songs from a Ledge is written and composed by Andrew Sharpe and Amy Kakoura, and directed emerging director by Lana MacIver. The production has spent the last year in workshops and over the past few months has previewed selected numbers at various festivals and venues across the UK such as Secret Garden Party, Wilderness, Kitchen Garden Café, The Tin and the Old Joint Stock’s sister venue, The Spread Eagle in Croydon.

“The run in November will be the first full length performance of the production,” says Timothy Hodgson, artistic director of the Old Joint Stock Theatre and dramaturg for the show. “We’re very excited, the music is stunning and the intimacy of the OJS Theatre will really bring alive the 1930s smokey jazz bar setting.”

The production runs from 17th-22nd November and tickets are now on sale. For more information, please visit www.oldjointstock.co.uk or contact the box office on 0121 200 0946.