We talk to Steve Howe, a true guitar legend. 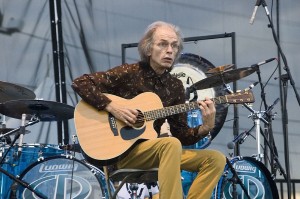 Steve is best known as guitarist with Yes, now into their fifth decade as the world’s most enduring prog rock band. He’s also touring solo and plays the Artrix arts centre in Bromsgrove next month. Steve has a lot to talk about, not least his upcoming shows.

“Last year was the first time in about five years I could do this. It’s something dear to my heart so I just wanted to come back and do some more. Back to the time when I joined Yes and I wrote Clap and Mood for a Day from Fragile, writing and performing my own solo pieces is central to my preservation. It’s an arm of my musical output that seems to feed all the others. It balances Yes and all the other stuff nicely because this is so personal, it’s my opportunity to control and perform the whole musical evening.”

You’re also fitting this in around a new Yes tour.

“We’re off to Japan and Australia in November but so far this year we’ve played Canada, England, Europe and America. We’ve hung the hat up for a couple of months to give me a chance to do my thing but also have some rest. Yes recorded and released a new album that’s come out this year called Heaven and Earth. Jon Davidson has given the group a whole new brash input from the vocal perspective that has consolidated all our plans.”

If you’d been a bank manager you would have retired by now. The music business clearly doesn’t pay as well.

“Well, Yes is a working band and there is a perception of success. We’ve been very successful but I don’t mind admitting we’ve also done the wrong thing at times. I don’t think I’d like to give up playing, as it feeds the whole regeneration of music. My wife and I have had children and they’ve then had children and it’s the same with music, it grows. It’s a re-birth, it’s a way we’ve presented ourselves which is different from how we used to present ourselves and it helps me to think that I’m not just ploughing the same fields.”

It must feel strange to be talking about albums that in some cases are almost fifty years old.

“We’re very proud of that. It’s great to have a new album out but we continually feed off the enthusiasm for our music. Yes are one of the few prog rock bands still performing flat out. We don’t do occasional shows, we do six or seven week tours. It’s not like when I became a musician in the sixties and the perception was that you had a couple of hit records and an album then you were off. The Stones and other great bands proved what Yes are continuing to inspire ourselves to, that we keep going.”

Looking back at those mid-seventies times, triple albums and Roger Dean covers. Do you ever think that things maybe went a bit too far? 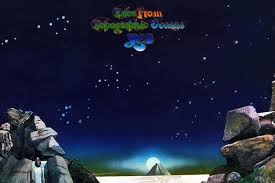 “There’s a perception sometimes to send up the things we did. It would be like saying why did Miles Davis record A Kind of Blue or why did anyone do anything different from what was going on? If you’re looking at Tales From Topographic Oceans maybe part one of side three is a bit OTT but basically we had to push the envelope and we went outside our comfort zone. But I also think it was a very inventive album and had very beautiful lulls in it.

“Some pretty trite things can be said about sending up what Yes were about. – ‘Give us a funny story about Yes from the seventies.’ It’s always the same one about the cardboard cow and the bale of hay in the recording studio. It’s not very funny, we just did it as a send-up of ourselves as a bit of fun. It’s a bit repetitive and I think that underneath it all there was a great creativity, writing things like Tales and Awaken, those kind of things were adventurous and I’m proud of them so I’m still sticking to my guns.

“Things are a bit wrong when these people have to search for a quip about groups from the seventies. Acknowledge them, enjoy them, appreciate some of the artistry that came through during that period. In the sixties the Beatles were the biggest band in the world, in the seventies we all invaded America waving the union jack, we got our foot in the door and stayed there. We’ve just toured and we keep running into bands like Procul Harum and Peter Frampton out there so I say revel in the enjoyment of great British music, from Benjamin Britten to bands like Syd Arthur, there’s a new band we’ve been touring with who are adventurous, they’re original and they’ve got some great style. Britain’s reputation for musical styles will maintain.”

The introduction of Geoff Downes and Trevor Horn in 1980 was probably the most controversial move in Yes’s history. Give that music was then so ludicrously pigeon-holed, was it a mistake to introduce, at that time, what was seen as two frivolous pop musicians into such a serious band?

“Hindsight can solve a lot of things but obviously you can’t change the past. When you think about the writing that Trevor brought to the album that was one point of view but the collaboration, it was a hiatus. If we’d made a crummy album then we would have had to swallow our pride but we kept Roger Dean, we kept a lot of the Yes style – there was still a ten minute piece in there. It sounds like I’m being cagey but whatever faults there may have been, they were appropriate faults for the time and they were very much along the lines of the kind of dreams we had then. I’m not averse to criticism, we were young and we were adventurous but I’m not ashamed of that.

“Chris and I had a vision that there was more to Trevor and Geoff than you’d seen in Buggles. There was a prog side to their music, their second album was called Adventures in Modern Music and that was almost a statement about Yes. Like Frankie Goes to Hollywood, who Trevor produced, it was a pop group but although they were screamed at, like many bands in the eighties they had a twist, they also had musical integrity. They weren’t a three chord band and the way Trevor produced brought complexity to the simplicity of pop.”

I firmly believe that behind the bad haircuts and daft clothes, there was some great eighties music.

“Absolutely. I’m still a big fan of Go West. They had hit records but the songs really stand out, the production was one of the mainstays of their music. The eighties did establish the kind of bands that were very solid, Spandau Ballet, Frankie, and a lot of the writing, they had great bass players, there was a fair bit of drum machine going on but basically the other stuff they did was great. There was a lot to shout about, it wasn’t all pop nonsense.

“There’s this looping round, where music pays tribute to styles of earlier years and thank goodness. I don’t think the music business undervalues musicianship like the headlines will scream. There are great musicians and it would be marvellous if that was the public perception.”

You mentioned Jon Anderson earlier. How is he these days?

“He’s had a bumpy ride since about 2005. Jon wanted to take a break from Yes because it was all getting a bit much, then he had a few health issues. He’s a lot stronger now and he’s found his feet again. I haven’t spoken to him for some time and that’s not a big issue, you retain and you lose contact with friends over the years for whatever reason, but whatever’s happened we wish each other well in our particular domains. Jon gets on with his shows , he’ll be playing Yes music and he’s got a right to do that. I don’t know if he would be up for going major tours and we’ve been investing in what is a very solid line-up. Obviously in 2004 there was a split but we’re going on with what we did and Jon’s got the right to do it on his own.”

We’re getting to that time of the year when the new inductees to the Rock’n’Roll Hall of Fame are announced, and there will probably be one notable omission – again.

“Ha ha ha…get me outta here. I don’t lose any sleep about it. I was very proud to get the gold discs and the best guitarist awards all those years ago. Those things are exciting and you do get blase when you get old but the Hall of Fame thing, that’s been going for years. Sometimes I think it’s bit of a joke because they have people in there who have one hit then do nothing for forty years, they’re pretty lightweight while bands, not just us, who have had their whole career but they’re not in. I don’t pay it any attention. Look at Rolling Stone, they’ve hardly written a word about us in forty years. If they can turn their back on us don’t hold your breath. But I wouldn’t knock America for a second because they’ve been very, very supportive of prog music and they still get very excited.”

And as I read recently, there’s nothing less rock’n’roll than a rock’n’roll hall of fame.

“Now that’s a great quote, and it’s true. It’s against what rock’n’roll used to stand for. But then again the rebel, the oblivious, the dead rock star who took too many drugs or drank themselves to death, the great image of the rock star, I think there’s a lot more stories to tell about people who have taken their lives and their careers on. The victims of rock’n’roll is one thing but having responsible people in there, responsible intelligent musicians, I can see loads of other guys like that. It isn’t about trashing and messing up other peoples’ lives. It’s a great shame so many brilliant musicians were lost because they got too indulgent and didn’t realise their own strength. There are many ways of abusing yourself, as a musician you think you’ve got some sort of right to get the edge, but that’s no way to carry on. Fool around a bit when you’re young but once you realise what your goals are it’s time to get clear. Have some priority, have responsibilities, then don’t act like a jerk. Don’t become a victim, become proud of what you can do.”