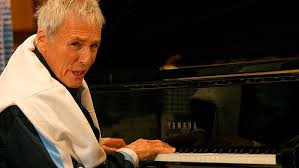 Let’s see, what shall we begin with… how about Don’t Make Me Over; I Say A Little Prayer, This Guy’s In Love With You; Walk On By? Burt Bacharach has so much Grade A musical material in his locker that he can afford to present such gems in the form of a medley, knowing that he could never perform all of his hits (a staggering 72 in the US alone!) even if tonight’s 130 minute extravaganza lasted twice as long.

At 86 years of age, this is Bacharach’s first visit to Birmingham and, ever the consummate showman, he tells us how beautiful the city is and how he’ll be cheering for Aston Villa come the new football season. Diminutive and slender, and just a little frail – an impression accentuated when he’s hunched over the keys of his very grand piano – Bacharach is still sharp of mind and still composing around sixty years after he first toured as a conductor for Vic Damone and Marlene Dietrich (of whom he wasn’t a fan).

A move to the songwriting production line that was Paramount Records’ Brill Building and a subsequent teaming with lyricist Hal David lead to the formation of one of Americas most revered songwriting partnerships, with the pair penning scores of classics for some of the biggest names of popular music, not least Dionne Warwick, for whom they wrote nine US top ten hits. Bacharach and David were to the 1960s what Cole Porter had been to the 1920s and 30s, their songs the epitome of cool sophistication, courted both by Tin Pan Alley and by Hollywood.

Tonight sees Bacharach accompanied by a ten-piece band, with the main man tinkling the ivories and occasionally singing, though for the most part the vocals are handled by a trio of singers. Whilst the musicianship is of the highest order, the vocalists’ delivery is generally bland and characterless, the product one suspects of formulaic music school training and the performers’ overexposure to American Idol.

It may be unrealistic to expect vocal renditions of the calibre achieved by the world class stars who made these songs famous, but too often tonight the stellar songwriting and high quality of musicianship is not matched by those delivering the words. Fortunately a crisp sound balance and Symphony Hall’s faultless acoustics are very much up to the mark.

Early career successes, such as The Story of My Life and Magic Moments are intermingled with Send A Message To Michael and Baby It’s You (Bacharach stating modestly how honoured he is to have had a song covered by the Beatles) as well as God Give Me Strength from Bacharach’s successful 1998 collaboration with Elvis Costello and My Little Red Book (All I Do Is Talk About You).

The evening progresses with several further medleys and songs that would be highlights of most artists’ sets, high points of most songwriters’ careers, just keep on coming, relentlessly; I’ll Never Fall In Love Again, Do You Know The Way To San Jose; Wishin’ and Hopin’ Anyone Who Had A Heart; (They Long To Be) Close To You; Trains and Boats and Planes…there surely isn’t another living musician, save for Paul McCartney, who could deliver such a volume of world class material and still omit classics such as 24 Hours From Tulsa and I Just Don’t Know What To Do With Myself.

Towards the end there’s a section devoted to Bacharach’s film scores – The Look of Love; Alfie; What’s New Pussycat?; Time To Get Ready For Love, the glorious instrumental theme from the 1967 comedy Casino Royale and a recently written piece called Hush, from a production called Some Lovers

After over two hours without leaving the stage (although he does sip from a bottle of water occasionally) Burt Bacharach closes with Raindrops Keep Falling On My Head, and, encouraged by the maestro himself, the audience sing along. Then slowly he exits, shaking hands as he does so with some of those who have surrounded the stage, acknowledging the rapturous applause, smiling and waving.

Birmingham has waited around half a century to see Burt Bacharach. He didn’t disappoint.