Britain’s Got Talent might have been on TV Saturday night, but Bernie Jackson saw two of the nation’s greatest examples at the 02 Academy. 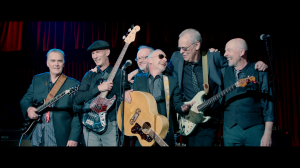 Miles Hunt was always going to have an uphill task, simply by not being Glenn Tillbrook, who is supporting Graham Parker for most of this tour. With the audience being of an age to have spent most of its formative years singing along to Squeeze rather than the Wonder Stuff, it seems likely that most people could have named two of his songs at best. They were soon won over.

Creating a massive swell of sound from just one guitar, a violin and voices, the set stormed away, boosted by some magnificently funny anecdotes, mostly involving alcohol, pubs, their regulars and how Kirsty McColl came to sing on Welcome to the Cheap Seats. Should you ever find yourself bored and channel surfing in the afternoon, every time you see someone serving a steak on Come Dine With Me, check out the backing track. Somewhere in a hotel room, and awaiting his next festival appearance, Miles Hunt is hopefully enjoying a “ker-ching” moment from the rights to Size of a Cow.

Graham Parker and the Rumour have worn well. Like their audience, they’re older, greyer, and wiser, but they’ve definitely still got it, even if Martin Belmont has retired his gold suit. Sandwiched uneasily between punk, new wave and pub rock, the only label that seemed to sit comfortably with Graham Parker was that of angry young man. Fortunately, he’s hung onto the role of angry slightly more mature man, with the newer critique of American foreign policy Snake Oil Capital of the World sitting easily alongside older Parker favourites including Hey Lord, Don’t Ask Me Questions, which still manages to blister after all these years.

Parker may have been a bit miffed that fans had called for solo track Get Started, Start a Fire to get the Rumour treatment, but it would seem he was kidding, as jiggling in the audience turned to some full scale dancing while The Rumour cranked it up another gear. Hotel Chambermaid came early in the set while the sound was still muddy, but technical hassles didn’t interfere with Lady Doctor, Local Girls, Discovering Japan and the romp through Soul Shoes that finished the set. Parker even threw in some bonus material, recorded but not yet mixed, on the crisp and tight Wall of Grace.

The band seems to have grown in confidence since last year’s gigs, perhaps finally believing in their enduring power to fill a venue. At Bristol last year, they seemed slightly in awe at the reception they received. Now, there’s a little more of The Rumour’s legendary swagger, coupled with the self-deprecating wit that sits just as well now as in the mid-seventies when Graham Parker first hung up his petrol pump hose and donned his shades.

Those who caught Parker’s mini-tour last year will be pleased to know that the set list is different in parts. There’s no Long Emotional Ride, nor I Want You Back as an encore, but instead there are bonus tracks that fans doubted they’d ever hear live again, including a chilling You Can’t Be Too Strong from arguably Parker’s strongest album Squeezing Out Sparks and the standout title track from Stick To Me. Last year’s album Three Chords Good is well represented, but there is plenty from each decade of the Parker output, all echoed word for word by a rapt audience on the kind of night when everyone’s eighteen again.