Singer, guitarist, rapper and comix artist Jeffrey Lewis is always itching to change the name of his backing bands. Here’s yet another, with the Jrams being a bass-and-drums pair (Heather Wagner and Caitlin Gray), keeping the tourbus lightly populated for maximum road-grease on the leader’s endless touring schedule. 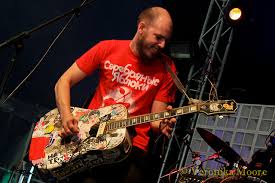 Lewis was returning to the Actress & Bishop’s upstairs room after a couple of years, to find the performance positioning improved, with the band playing on a slightly-raised circular corner-stage. He pulled a good-sized crowd, populous without being cramped, allowing a good vantage point for all.
He’s also finally advanced technologically. Previously he’d quaintly presented his narrated comic book segments of the set by physically flicking pages whilst standing on a chair. Now he’s actually brought along a projector, angled at a wall-taped white sheet. More conventional, perhaps, but allowing more peepers to see his artwork in action. On this evening Lewis chose a complete history of colonialism in Vietnam, and a disconnected creeping-brain creature’s adventures, just a couple of his typical comix preoccupations.

He’s following the less-acknowledged trail of whitey post-beatnik rap gushing, as mastered by the above-named artists. When Lewis gets into a rambling rush of syllables, he displays a remarkable feat of memory, a substantial gift for evocative turns of phrase, and a snarling delivery that always convinces a crowd that he means what he’s spouting. The Jrams fed off this, shooting back energy that further goaded their leader. The trio played tight shit, but still made it sound chaotic and ramshackle.

Lewis sang about his love of English food items, about the unnerving screams of his new neighbour, and about meeting (maybe) Bonnie ‘Prince’ Billy on the L train in NYC. All of these frightening, in their own ways. When he scuffs on the distortion pedal, his acoustic guitar becomes a monster, and the band rocks out like the Velvets or Sonic Youth, then he’d snap it off and return to a ballad state.

The end-run was magnificent, the night peaking with a recent analysis of the Pussy Riot imprisonment, with WWPRD going way beyond that starting point, to comment on the whole whoring practice of band sponsorship by big business, increasingly prevalent within the modern music scene.
Bassist Gray also switched to a tiny keyboard on several tunes, and for this one, she taped down a single key, to create the kind of drone-tone familiar to Indian classical music fans, then launched off into one of her nimbly propulsive basslines, whilst trading vocal lines with Lewis as the heat magnified. He’s a glowing raconteur, choosing to encore with a pair of Lou Reed songs, advocating a retrial of the dead one’s less popular Mistrial album from 1986, which he says is very popular in the bargain bins of NYC.

First there was the softly drifting Tell It To Your Heart and then The Original Wrapper, which nestled perfectly next to Lewis’s own verbal streamings, punctuated by savage guitar bursts that were made all the more powerful due to their two-second instantaneousness. Yes indeedy, this gig certainly ranked high on the always-peaking Jeffrey-ometer!