Jimmy Constable of 911, nineties boy band and now reformed in more ways than one, talks to us about the pains and pleasures of stardom. 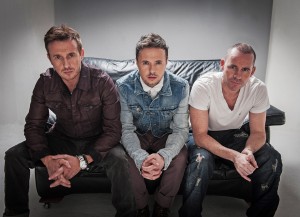 For five years the band had gold discs, number ones and fans around the world. When that all came to an end as the band split, it must have taken some time to re-adjust.

“We did the usual things, I spent the first two years after the band split on a downward spiral, going through drugs and alcohol. Me and the lads didn’t speak for the first few years, then we got back talking again. Everyone’s moved on and doing their own businesses, I’ve got married and have two kids at home, we’re all moving on with our lives so it came as a bit of a surprise to come back for the Big Reunion last year. And it all went from there.”

When we think of 911 we think of the classic boy band story. But you weren’t like that at all – there was no Simon Cowell, no Svengali figure putting you all together.

“We weren’t manufactured at all. When we put the band together we didn’t even had a manager. In those days we hired a van and a PA then did tours of school halls. We hired Lee after we’d done a radio road show in Carlisle, which was his home town. We got hold of him and moved to Glasgow because there was a guy who wanted to manage us even though he hadn’t managed anyone before. We spent the first year getting a fanbase together who we knew would support us. Our manager based his learning on Nigel Martin-Smith, because Take That did the same thing, touring and doing the hard work.

“Back then there were plenty of record companies and they’d take a gamble but now it’s about being on the X Factor. Talent doesn’t get a look in – unless you’re on TV you won’t get a chance. In the old days Radio One would back bands but now a lot of stations are like record companies, they’ve merged and they don’t have the resources now so they aren’t as important. Being on their A list used to be a godsend but now you have to fight to get every bit of support.”

You got there though, and you must have had an incredible time of it.

“We released a couple of singles on our own then when they got into the charts others were interested and eventually we went with Virgin. With that sort of power behind you, you can achieve so much, you could do the Saturday morning TV shows and they made things happen. It just took off. Asia was our biggest market – it was phenomenal. The first time we went there they had to draft in the army just to get us out of the airport in Malaysia.”

After five years of living the pop star life, with all that entails, it came to an end and at the worst possible time. An unsuccessful court case had seen the band lose most of their wealth to their (former) manager and in 2000 Lee Brennan and Spike Dawbarn, the other members of 911, had had enough. Life fo rJimmy Constable came crashing down around his ears.

“The decision to split was down to the others and I didn’t have a lot of choice so I was in the situation where I woke up one morning and didn’t know what to do next. So I slipped into the drugs and all the rest of it. It wasn’t a great time.”

Given that Jimmy has gone on record as saying he and his partner of the time would regularly drink twelve bottles of wine a day between them and he found himself on one occasion with a bottle of whisky in one hand and a bottle of pills in the other, “not a great time” is probably an understatement. However, there was a revival in the fortunes of Jimmy Constable, after a fashion. 2006 saw a return to the music business with apart in the MTV documentary series Totally Boyband, where Jimmy joined Upper Street, comprised of other similar veterans.

“That was a weird time. I jumped at it as a chance to get my profile up again and I was like a rabbit caught in headlights. It was a good way of getting back but I don’t know if I was mentally balanced because I didn’t know if I was able to accept the music business again. It was a great time and we’ve stayed friends. People think we split because the first single didn’t do well but it was never meant to be a band. It was always a documentary, it was only going to be a one-off.”

911 got back together for the Big Reunion, you’ve new material and are about to start a tour. What are the 2014 version going to be?

“We’ve realised music has moved on from nineties cheesy pop. We’ve tried to keep an element of commercialism but we’ve grown up as songwriters and our stuff is a lot more anthemic. “

“We did arenas with the Big Reunion but we have to face the reality of not knowing if our fanbase is still out there. If they want to come, great, but we ultimately don’t know how it’s going to go. It’s like starting again because we’ve been away so long we have to put the feelers out again. We can reminisce with the people who think they’re 15 or 16 again when they hear the songs but if they hear the new stuff and like it we’ll make our plans around that.”

Will you still be doing the moves that you did two decades ago?

“We’re not going to be sitting on stools behind mike stands. Some of the stuff will be done in different ways but the breakdancing will still be in there. When we did the Big Reunion we decided we were going to get fit so we can give the audiences a reminder of the old days.”